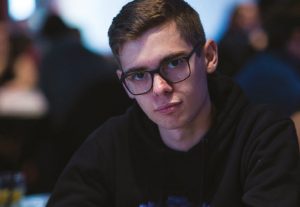 22-year-old German Fedor Holz wins $3.4 million at the WPTN Philippines and his second title in as many months. (Image: bluffeurope.com)

The World Poker Tour National (WPTN) kicked off 2016 with a bang by offering the world’s richest players a chance to compete in a $200,000 buy-in Super High Roller.

The largest buy-in event ever offered by the WPT, the Triton Super High Roller Series $200,000 Cali Cup in the Philippines welcomed a total of 40 unique players and 12 re-entries, which meant the prize pool sailed over the $10 million mark.

By the time six players reached the final table, the overall prize pool meant there was an impressive $3.4 million on offer for the eventual winner.

Heading into the final throes of the tournament, 22-year-old German player Fedor Holz found himself among a who’s who of poker talent, including Phil Ivey, Mike McDonald, and Dan Colman.

Despite being one of the youngest players on the final table, Holz was riding the crest of a wave after taking down the WPT Alpha8 Las Vegas for $1.5 million at the close of December.

With momentum and the exuberance of youth on his side, the young German sat back and watched Colman hit the rail in sixth, before he made his move.

Looking for a way to double his stack, Holz pushed all-in against the well-stacked Ivey, who made the quick call with pocket queens.

Needing a minor miracle to get his Kc Qh across the finish line in first place, Holz looked to the poker gods before raising a smile after the board ran out: Kh Td 5h 6d Jh.

After taking a moment to breathe a hefty sigh of relief, Holz got to work using his new found stack to bully his poker peers.

Ivey was the first to fall to Holz before the pro on a roll dispatched with Steve O’Dwyer in fourth place. Three-handed, it was then David Peters who enjoyed a rush of cards to eliminate Devan Tang, but by the time heads-up play was in full swing, it was Holz who recaptured the momentum.

With the stacks deep and time pressing on, Peters and Holz agreed to shorten the blind levels to 20 minutes, but it would only take four hands before the latter clinched the WPT title.

A classic coin flip between Holz’s pocket sevens and Peters’ Ac Qc put the result on a knife edge; however, as the dealer presented the Jh 5d 5c Kd Kh board, it was the sevens that won the hand and the $3.4 million top prize for Holz.

He must be playing well and running good . Impressive win !

This kid is on fire. Playing so well the last 6 months or so. Not at all surprised that he won.