George Danzer Beats Shack-Harris for WSOP Player of the Year 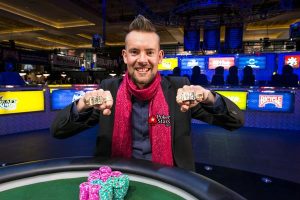 George Danzer won three gold bracelets on his way to winning the WSOP Player of the Year race for 2014. (Image: WSOP)

George Danzer scooped the 2014 World Series of Poker (WSOP) Player of the Year (POY) award, ending a dramatically close season that came right down to the final World Series tournament. But in the end, it was three-time bracelet winner George Danzer who walked away with the prestigious honor.

Danzer survived a late charge by Brandon Shack-Harris, and the winner wasn’t officially determined until Shack-Harris was eliminated from the final two tournaments on the WSOP Asia-Pacific (APAC) schedule.

Danzer won the award on the back of one of the strongest WSOP runs in recent memory. The German poker pro took down the $10,000 Razz event in Las Vegas, and followed that up less than two weeks later by winning a $10,000 Seven Card Stud Hi/Lo tournament.

The winning didn’t stop when the WSOP moved to Australia, either: Danzer regained the POY race lead for good after he won the A$5,000 ($4,385) Eight-Game Mixed event last week.

That win made Danzer only the sixth player in history to win three WSOP bracelets in the same year, and the first to accomplish the feat since Jeff Lisandro did it in 2009. But it took more than just those wins for Danzer to make him the top player of the World Series. In total, Danzer made five final tables and cashed in 10 WSOP events, giving him a resume that was hard to top.

But one man certainly tried. Brandon Shack-Harris stayed with Danzer until the very end, even passing him for the lead at one point during the WSOP APAC swing. And while Danzer’s big win in the Eight-Game Mixed tournament threatened to put Shack-Harris away for good, there was still some drama to be had on the final days of the series.

Shack-Harris entered the WSOP APAC Main Event knowing that he could pass by Danzer if he finished in second place or better. That scenario started to look plausible as Shack-Harris chipped up and found himself making a deep run in the tournament. But it ultimately wasn’t to be, as he would be eliminated in 17th place by Frank Kassela.

But even that wasn’t enough to close the book on the Player of the Year race. Shack-Harris’ elimination gave him time to register for the A$25,000 ($21,900) High Roller tournament, the final event of the WSOP year. After his deep Main Event run, Shack-Harris now had the opportunity to beat Danzer if he could finish in the top 4 in the High Roller.

Unfortuantely for the American, fate wasn’t on his side. Early in the tournament, Shack-Harris got his money in good on the flop with trip queens against the pocket aces of Sean Winter. But an ace on the river ended Shack-Harris’ tournament, clinching the Player of the Year award for Danzer.

While Shack-Harris won’t be winning any awards, it’ll be hard for him to be too disappointed in his 2014 World Series. He won over $1.4 million over the course of the series, including a victory in a $1,000 Pot Limit Omaha event in Las Vegas.

Danzer took to Twitter to express his relief that the tension of the battle with Shack-Harris was finally over.

“Although i enjoyed the sweat i am relieved now that the race is over,” Danzer wrote. “And i know [Shack-Harris] is going to get another chance. Mad props.”