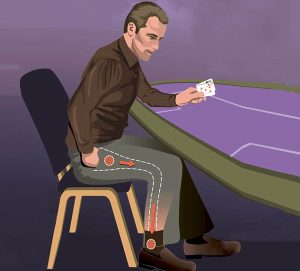 A Genting Casino Cromwell Mint poker dealer is out of a job after being caught with his hand in the poker chips. (Image: dailymail.co.uk)

A Genting Casino Cromwell Mint London-based poker dealer, working at the chi-chi British casino, has been sacked after an investigation found that the Romanian dealer had allegedly been stealing chips over a sustained period of time.

Unnamed in the latest reports, but known to be a fulltime member of the staff at the Genting Casino Cromwell Mint, the dealer reportedly used a secret tube concealed in his trousers to pass chips into his socks.

Using sleight of hand, the dealer reportedly dropped the chips into his pocket while players at the table checked their hole cards.

At certain intervals, he would then pass the stolen poker chips to a female employee while they both took a break outside for a cigarette.

The final piece of the puzzle involved a casino patron visiting the venue at a later date, taking the chips to the cashier’s desk, and exchanging them for cash.

After suspecting the poker dealer of foul play, security staff at the casino began to monitor the situation via CCTV and eventually arranged an impromptu search.

Striking just before the dealer was able to offload his latest haul, the sting resulted in chips literally falling out of the man’s trousers and socks.

With all the evidence they needed, staff at the Cromwell Mint Casino phoned the police before terminating the dealer’s contract. At this point, the man was cautioned by police, but what happened after this is unclear.

According to a report by UK newspaper The Daily Mail, whether or not the poker dealer has been charged with a crime isn’t entirely clear.

A request for further information from the casino was declined and police have been unable to confirm whether or not further criminal charges will be brought against the man.

Overall, it’s believed the poker dealer pocketed more than £12,000 ($17,600), as police were able to find that amount of cash inside his London flat.

However, if the scam had been going on for as many months as the casino suspects, then it’s likely he banked a lot more than that.

In a similar case from 2010, Grosvenor Victoria Casino dealer Wayne Wagner was arrested and jailed for 15 months after he admitted to stealing £69,000 ($101,000) over a six-year period.

After his scam was uncovered, Wagner explained that he would steal as much as £1,000 in casino chips each month until he was eventually caught in 2010.

After news of the latest alleged swindle took place, a number of former casino employees commented on the story. One particular reader posting under the moniker “DingDing” suggested that such actions were rare and something they never contemplated during their time in the industry.

“Spent six years as a dealer/inspector and it never crossed my mind to steal from the casino I worked for; even when I was counting the takings which could amount to £250k ($368,000) a day,” the former dealer wrote on dailymail.co.uk.

This probably happens more often than one would think . It’s surprising that the cameras didn’t catch him sooner . lets hope charges are forthcoming ! By the way , a player who hosted our regular home game , who we thought of as a friend , was caught palming chips . he probably was doing it for 2 years !

“what happened after this is unclear” yeah, they broke a bunch of his bones and he was never heard from again