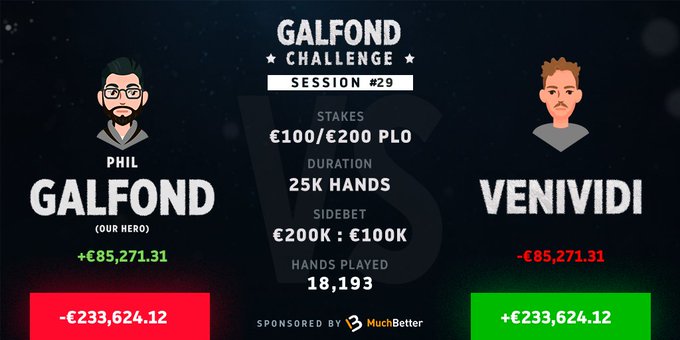 The Galfond Challenge is really starting to get interesting. (Image: Run it Once)

In the aforementioned 2017 Super Bowl, New England trailed 28-3 in the third quarter. It’s certainly not impossible to rally from such as massive deficit. But the odds are stacked against a team trailing by 25 points at any point in the game, let alone the third quarter.

Behind Tom Brady’s brilliance, New England rallied to win 34-28, scoring 31 unanswered points. Many consider it one of the greatest comebacks in sports history. Galfond just might be a few weeks away from pulling off a comparable miracle.

Following a month-long break, the PLO pro, formerly known as “OMGClayAiken” on Full Tilt Poker, began what just might turn out to be the greatest comeback in poker history.

Through 14 sessions this month, Galfond is up €666,616. His Thursday session, streamed live on Twitch, was yet another impressive performance. He turned a profit of €85,271 and continued his improbable run.

Still, Galfond trails by a significant margin. Despite his dominating performance this month, the PLO legend remains an underdog to win. With 6,807 hands remaining, Galfond must profit nearly €35 per hand on average the rest of the way, or he loses.

Win or lose, Galfond’s comeback has been nothing short of incredible. And by streaming each session on Run it Once, he’s giving his poker site some much-needed publicity. What better way to promote a site than by streaming a highly-publicized poker challenge?

Incredible comeback by Phil. I can see him coming out a winner with the momentum he has

This whole thing seems like a setup to me. Galfond prob know or owns Venvidi account. He gets stuck huge and makes huge comeback. Smells like a publicity stunt to me…