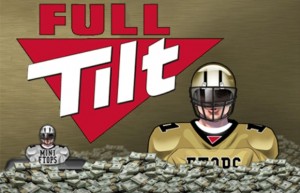 The Full Tilt Online Poker Series (FTOPS) has consistently been one of the biggest and most lucrative online tournament series in the history of online poker. Dating back to the original FTOPS, which was played in August 2006, the series has seen 628 events run with more than 26 million flops being seen. The series features 23 poker variations, with the largest event bringing in almost 10,000 players. This coming Sunday, March 30, FTOPS XXV will begin once more with a total of 31 events bringing a guaranteed prize pool of over $6 million.

This FTOPS will feature the new Flipout Tournament format, which is exclusive to Full Tilt Poker. In this format of tournament, players go all in automatically on every single hand until the bubble busts. Play is then switched to a regular format tournament and continues until a winner is determined.

Multi-Day events will also be seen in FTOPS XXV, as will Rush Poker Tournaments, touted as the world’s fastest poker game, because players are immediately taken to a new table and dealt a new hand as soon as they fold.

FTOPS XXV will feature many poker variants, including No Limit and Limit Hold’em, Omaha games, HORSE, Razz, and 6-Card Omaha tournaments. Full Tilt has also piqued many players’ curiosity by stating there will be three “Mystery Events” during the series.

A good number of events in the series will feature a guaranteed prize pool of at least six figures, with some events boasting guarantees that start at a half-million dollars. FTOPS XXV will kick off on Sunday, March 30 with a $200+$15 NLHE Re-Entry tournament that will have a $400,000 guarantee, with Event #2, a $50+$5 NLHE Multi-Day tournament, kicking off just three hours after the first tournament.

For players that want to win ticket entries into any of the events, satellite tournaments are running this entire week at Full Tilt Poker. Grinders looking to get into the first event can participate in $69+$6 one-table Sit’n’Go tournaments, or play in a $53.75+$1.25 four-player Sit’n’Go. Players looking to get in using Full Tilt Points can play in 245FTP 180-man tournaments. Outside of those formats, there are many other satellite events running every single day leading into the first event. Players interested in qualifying for other events can do so as well and can find a satellite schedule for each event on the official FTOPS XXV schedule page.

There are many exciting new features, events, and prizes to celebrate the 25th incarnation of the FTOPS tournament series. First, players are encouraged to take a crack at a share of $25,000 worth of cash, tickets, and gear in the FTOPS XXV Flip Freerolls. Players receive a ticket for a freeroll for each FTOPS XXV entry, with 25 freerolls taking place during the series.

Also, players can participate in the MyFTOPS promotion, with the chance to win a free entry into their favorite event. In addition to that, the player that finishes in first place on the FTOPS XXV Leaderboard gets a special FTOPS Black Card Pro avatar and four months of Black Card Pro sponsorship status. Players that receive this special designation get 100% cash back and a choice of either a $10,000 bonus, or an FTOPS ticket package worth $12,000.

Finally, everyone that makes it to a final table receives a limited-edition FTOPS jacket and those that actually win an event get the jacket, plus a gold FTOPS jersey and a gold-jersey avatar.