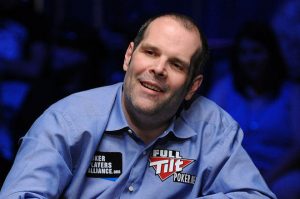 Howard Lederer and his fellow former Full Tilt Poker execs reached an agreement with the plaintiffs in a lawsuit. (Image: pokernews.com).

The deal was made behind closed doors and wasn’t released publicly until recently. The plaintiffs were originally seeking upwards of $450 million.

Full Tilt Poker hasn’t done business in the United States since Black Friday in April 2011. The site, operated by directors Ray Bitar, Chris Ferguson, Howard Lederer, and Rafe Furst, was shut down by the Department of Justice and faced numerous lawsuits and criminal charges.

Although no executive served any prison time, they all received extreme public backlash. When the site got shut down, customers were unable to get paid out due to a shortage in reserve funds. That didn’t stop the aforementioned executives from taking multi-million dollar bonuses.

According to reports, the discussions between the plaintiffs and FTP began last year to avoid court fees. Neither party has commented publicly on the case.

Where are they Now?

Since Black Friday, for the most part, the four high-profile FTP executives remained out of the spotlight. Ray Bitar avoided jail time for his role in the company’s scandal thanks to an alleged serious health condition. He resurfaced earlier this year when pictures of his seven-figure wedding surfaced around the Internet.

In 2012, Howard Lederer gave his first public interview but refused to offer any apology or take responsibility. Prior to the start of the 2016 World Series of Poker, the Professor released an apology through Daniel Negreanu, finally owning up to his mistakes. Lederer, for the first time since 2010, competed in WSOP events but didn’t cash. He was not welcomed back with open arms.

Chris “Jesus” Ferguson also reentered the poker world this summer but refused to offer up an apology. He had a successful summer, cashing in 10 WSOP events. When pressed for an interview, Ferguson responded with, “I’m just here to play poker”, or completely avoided the reporter.

The biggest issue FTP faced following Black Friday was paying its players. The company didn’t have enough in reserves to pay the customers despite its owners taking millions of dollars in bonuses.

Many FTP players went years before receiving a dime. That caused public outrage. As of now, the majority of players have received their money. PokerStars now owns the rights to Full Tilt Poker and has recently merged the international sites together.

Those swines screwed my favourite site.Lederer is just an arrogant prick!