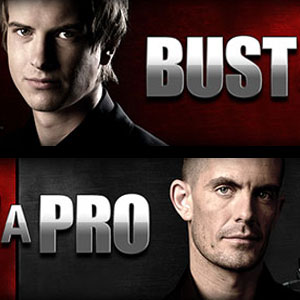 This month, Full Tilt Poker is giving players an opportunity to win a heads-up match against Gus Hansen or Viktor ‘Isildur1’ Blom and win a big cash prize in their Bust a Pro event.

With enough experience and wins under their belt (and some shots), any player is bound to brag about their poker skills. These days, online poker rooms are the ideal way to turn any Average Joe with deft, virtual hands into a budding poker star. But do any of these players have what it takes to face off with an actual Pro? Full Tilt Poker is giving all players the chance with their Bust a Pro event taking place this month.

Throughout the month of December, Full Tilt Poker is giving players a way to challenge two poker pros in heads-up matches and a prize of up to $50,000. Gus Hansen and Viktor ‘Isildur1’ Blom, members of The Professionals team at Full Tilt, are the two pros players will test their skills and cash against.

Gus Hansen is referred to as the “elder statesman” of The Professionals team since he was the only member to have played their first hand in the 1990s. Originally known for his skills at backgammon, Hansen became popular during 2002 and 2003 when he won three World Poker Tour titles. His fearless nature and ability to get away with bluffs also helped him nab a World Series of Poker bracelet. Viktor Blom is the youngest out of The Professionals and captivated the poker world with his online nickname ‘Isildur1.’ Capturing the interest and entertainment of thousands of players, he surprised everyone by revealing himself to be 20-years old. Blom has won several events including WSOP cashes.

Players will compete for a spot in the event by vying for $10K Bust a Pro Freeroll tickets. December 15 through December 28 are the two qualifying weeks in which players can get a ticket. To have a chance at a ticket, players will need to deposit $20 or more and then earn 25 Full Tilt Points on at least one day during a qualification week. The more days that players earn 25 Full Tilt Points, the more chips they will start with during the Freeroll. Starting with 1,500 chips and capping at 4,000 for five or more days, players who qualify will receive their Bust a Pro Freeroll tickets on the day the freerolls are scheduled.

Play it Safe or Risk it All?

On Sunday, January 5, the top players from the $10K Freeroll will finally get their shot at challenging Hansen or Blom for $50,000. Up to three rounds of heads-up matches will then be played to see which players can actually beat the professionals. In the first round, players can win up to $5,000 and a ticket into Round Two where an additional $15,000 can be won. While the cash from Round One can’t be lost, players are given a choice for Round Three: risk the $15,000 from Round Two and play for $50,000 or walk away with $20,000.

“Bust a Pro is a really exciting opportunity for our players to test their skills against the biggest names in poker,” says Sarne Lightman, Full Tilt’s Head of Marketing. Without a doubt, the chance for a shot at poker fame and a large grand prize is a tempting opportunity for players. Poker fans will know soon enough who had what it took to play against a pro and walk away a winner.