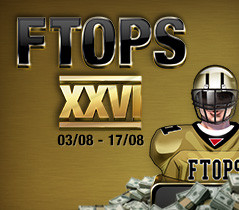 Full Tilt Poker has announced the schedule for FTOPS XXVI, which includes 31 events and $4.5 million in tournament guarantees. (Image: FullTiltPoker.com)

One of the most popular online tournament series returns at Full Tilt Poker in the form of the Full Tilt Online Poker Series, commonly referred to as the FTOPS. This sixteenth incarnation of the series will begin on August 3 and end on August 17, consisting of 31 events and a combined prize pool of at least $4.5 million. The tournament series will end with a huge bang in the form of a Main Event tournament that will boast a prize pool of at least $1 million.

The Main Event does not have an event number and will be played on Sunday, August 17 at 13:30 ET. The format will be a $600+$35 No Limit Hold’em Re-Entry event and offer a $1 million guarantee. Satellites for the Main Event range from 90 player sit-n-go tournaments (1,450 Full Tilt Points entry fee), to a massive “Monster Re-Buy to FTOPS Main Event” tournament that costs just $5+$0.50 to enter.

As is the case with the last few previous FTOPS series, the player that garners the most Leader Board points at the end of the entire set of tournaments wins a four-month Black Card Pro Sponsorship contract. This deal kicks in on September 1, after the FTOPS has concluded and will offer the fortunate “sponsored pro” a ridiculous 100% cash back on their play at all tables.

On top of that, Black Card Sponsored Pros also get exclusive Black Card Pro merchandise and double Full Tilt Points while at the tables.

Another promotion is the “Bouncebackability Freeroll” which allows players that get kicked to the rail on the bubble to recoup some of their funds and dignity. These unfortunate players will receive a ticket to a special freeroll to duke it out for some money.

Finally, players can also win some nice FTOPS gear, as all players that make a final table receive a limited-edition jacket. Those that win an event win a gold FTOPS jersey, the aforementioned jacket, and a gold-jersey avatar to use at the tables.

Satellites Running With a Promotion

Full Tilt Poker is also running satellite tournaments to each FTOPS XXVI event. Players can find out the satellite schedule by visiting the tournament’s page and then looking at the satellites section. There is also a new FTOPS Satellite Heroes promotion running this time around, which rewards players that earn their way into events via satellite play. Players that get in this way that also cash in the event win a seat into the FTOPS Satellite Hero Freeroll, which will award 25 seats to the $75 MiniFTOPS Main Event. Players that get in to three or four events and cash will get the seat plus $50 in tournament credits and those that do it five or more times get the ticket and $100 tournament bucks.

Could you imagine being these king of FTOPS! First off all the prize money you would earn to become #1! Then getting the black card with 2x points for every table you play that is sick!!!