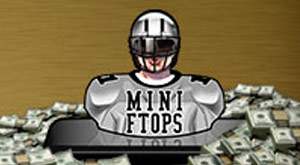 The Full Tilt Poker MiniFTOPS XXVI starts up on Sunday and will feature 31 events and over $1.4 million in guaranteed prize pools. (Image: Full Tilt)

The Full Tilt MiniFTOPS XXVI tournament series kicks off this Sunday, September 7. The popular set of poker tournaments mirror the same events held during FTOPS XXVI, but at one-tenth the buy-in. That does not mean that the prize pools are to be ignored, as the popular poker site has guaranteed at least $1.4 million in prize money. Players can start entering in the 31 events starting Sunday, with the series culminating in the $70+$5 No Limit Hold’em Re-Entry Main Event, which will boast a $500,000 prize pool.

The events played during MiniFTOPS XXVI will include a wide variety of formats, including Rush Poker, Re-Entry, and even Multi-Day tournaments. There are also different types of poker games to be played, including No Limit Hold’em, Limit Hold’em, HORSE, Razz, and even 6-Card Omaha. Players can buy directly into any event, or have the option to win their way in via the robust satellite system for as low as five cents, or just 25 Full Tilt Points.

There are three special promotions for this incarnation of the MiniFTOPS that players should note. First, there is the “MiniFTOPS Satellite Hero” promotion that allows participants to win “MTOPS” tournament tickets. All players need to do is satellite into any of the 31 MiniFTOPS events and cash in that tournament.

Another promotion happening is the MiniFTOPS Leaderboard. The person that finishes first on this exclusive list of grinders will receive a four-month Black Card Pro Sponsorship contract, which kicks in on September 22. This is a lucrative promotion because Black Card Pro team members receive 100 percent cash back on their play at tables, meaning they pay absolutely no rake.

Finally, there are also MiniFTOPS prizes that will be given away during each and every event on the docket. All players that make the final table of any event get an exclusive limited-edition MiniFTOPS hoodie. The winner of each event gets a silver MiniFTOPS jersey, plus a one-of-a-kind silver MiniFTOPS avatar to use at the tables.

If there are two events to mark down in calendars, the first would be the MiniFTOPS XXVI Main Event, which takes place on September 21 at 13:30 ET. This tournament is a $70+$5 No Limit Hold’em Re-Entry event that boasts a whopping half-million dollar guarantee. The other must-play tournament is Event #28, which gets started on Saturday, September 20 at 12:30 ET. This is a special Two-Day No Limit Hold’em tournament that has a $200+$15 buy-in and a $100,000 guarantee.

There is another six-figure tournament on the schedule players might want to get in. Event #16, played on Sunday September 14 at 13:30 ET, is a $30+$3 No Limit Hold’em Re-Entry tournament with an impressive $150,000 guarantee.

Satellites for Each Event

Players that want to participate in the MiniFTOPS Satellite Hero promotion, or just want to enjoy the challenge of winning their way into an event have many options available. To register for a MiniFTOPS satellite tournament, open the Options menu at the top of the game lobby and select Lobby View > Standard View. From there, set the filters in the browsing area to “Tournament” and then select Satellite > All > All Types. Simply scroll down the game list to find the relevant satellite tournament and click “Register Now” to get into the action.