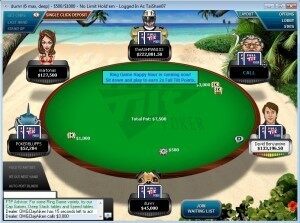 Sights like these may be less frequent now that many nosebleed levels have been removed from Full Tilt’s cash game selection. (Image: Full Tilt/PokerBonusTips.com)

Full Tilt has always been among the leaders in offering variety when it comes to the number of different forms of cash games players could choose from in online poker.

That has been a selling point for some over the years, but it may also come with a cost: new players can be overwhelmed by the number of choices available to them, while spreading the player base over so many different games can also lower the liquidity across the site.

That may be why Full Tilt has recently announced changes to its ring game selection, ones that will significantly reduce the number of different games available on the site to choose from.

The reduction in games will be most acutely seen at the nosebleed stakes, but will affect players of every level by removing many of the specialty options and directing players into more standardized games throughout the site.

“In order to simplify our ring game offering and help new players find the most active tables, we’re making some changes and we want to give you a heads up,” Full Tilt announced on their website Tuesday.

That was followed by a list of games that would no longer be offered in cash game formats.

In other cases, entire variants will disappear from the cash game offerings. Perhaps the most notable of these is HORSE, perhaps the best-known mixed-game format in poker.

Another notable removal will be coming at the end of April, when Full Tilt will eliminate Adrenaline Rush games from the mix. This was a version of the Rush Poker fast-fold format that only allowed players to buy-in with a maximum of 10 big blinds.

One of the first changes noticed by players, however, was the drastic change in the availability of high stakes games. In big bet games, the highest level is now $250/$500, where it was previously $400/$800.

Upon seeing these changes, some players initially thought there was an error or some kind of bug in the Full Tilt software. However, Full Tilt manager Shyam Markus confirmed in a Two Plus Two forums thread that these changes were intentional.

“Yes, I can confirm it’s not a bug,” Markus wrote. “Lots of changes were implemented today, and for sure many won’t be popular.”

Hopefully they will attract more players

The site is not coming up on my computer any longer