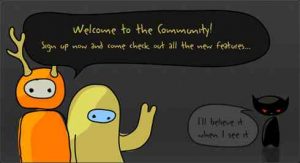 Full Tilt pressing full steam ahead with its bid to become a part of the Steam gaming community. (Image: engadget.com)

Online poker’s great move into the unknown took another turn recently after Full Tilt listed its services on the Steam network.

Known as an online community for games, gamers and gaming software, the platform could provide the key that unlocks a whole new demographic of poker players in the coming months.

In much the same way that platforms such as Twitch have become a home for gamers over the last few years, Steam is now a hub for gaming activity.

According to the site’s homepage, the Steam community is home to more than 100 million users while the average number of players online is close to 10 million.

A Complete World of Gaming

With this network of people all willing to play, chat about and swap in-game content, Steam appears to be a huge untapped market for poker and that’s something Full Tilt is looking to take advantage of.

However, before a free play version of Full Tilt’s top games, including Rush Poker, can be added to the Steam network, it must be voted on by members of the community.

After being submitted and listed on Steam Greenlight, the public then has its say on whether or not Valve (the company behind Steam) should list the game.

At this stage Full Tilt is still in the voting process and when you visit its page you’re greeted by a video that shows the dynamism of its product. Although listing on Steam Greenlight doesn’t equate to an automatic listing, the feedback so far appears to be positive.

A number of users have commented on the attractive software, while others have suggested the softness of Full Tilt’s games and potential for growth could be good additions to Steam.

One question Full Tilt was prompted to address was the status of real money gaming.

According to post made on October 12, Full Tilt on Steam would be free-to-play but contain in-game purchases that could be used to top up certain features.

Although Steam allows listed games to be played on multiple formats and players to interact in a small community, there’s no guarantee it will help Full Tilt take off.

At present there are more than 3,500 games listed on the network and Full Tilt would be considered a niche product among the usual offerings.

However, even if the site could tempt just a small percentage of Steam gamers to make the switch to its real money platform, it could dramatically improve Full Tilt’s current cash game average of 1,100 players.

Hide your credit cards parents if this goes through. 🙂

i voted positive to FT on steam 😛