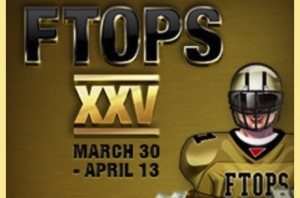 FTOPS XXV is coming with more than $6 million in guaranteed total prize pool.

The Full Tilt Online Poker Series first launched in August 2006. Its initial success in the online poker tournament world led to future installments of FTOPS several times each year. Now, the series plans to host and celebrate its 25th edition with perks for players and millions of dollars in prize money guaranteed.

FTOPS XXV has been announced and will run from March 30 to April 13, 2014. There will be 31 tournaments and a cumulative guaranteed prize pool of more than $6 million. Players can expect Rush Poker tournaments, multi-day events, reentries and multi entries, as well as numerous game variations that range from Hold’em to HORSE and even Six-Card Omaha. New special features will highlight the special 25th edition of FTOPS as well.

The schedule also features three “Mystery Events” – Events 6, 18, and 27 – for which details will be revealed in the coming weeks as FTOPS nears. Another interesting addition is Event 25, a “Player’s Choice” event, which will be determined by the MyFTOPS feature available from February 24 to March 2. Players can choose from 10 tournament formats and cast a vote on the Full Tilt Poker blog, and the inning choice will be Event 25.

Finally, the tournament will wrap with the standard NLHE Main Event, this one with a $635 buy-in, reentries allowed, and a $1.5 million guarantee. That will take place on April 13 to wrap the series.

The FTOPS XXV Leaderboard will offer the chance for the winner of the most points in the series to earn a Black Card Pro sponsorship contract to begin on May 1. Flip Freerolls tickets will be awarded to every player for every FTOPS entry, and players can win cash, merchandise, and a share of $25,000 worth of tournament tickets.

In addition, every player who makes an FTOPS final table will receive a limited-edition FTOPS jacket, and winners of FTOPS events will receive a gold jersey and special avatar for use on Full Tilt Poker.

Full Tilt Poker has had a great amount of success in its 25 FTOPS offerings, not to mention a comeback from its Black Friday-related shutdown and subsequent relaunch as a PokerStars sister company. While FTOPS grew to include tens of millions of dollars in its heyday, the series is making a serious comeback.

To date, FTOPS has offered 628 events in the series. The first FTOPS Main Event in August 2006 had 1,468 players, and a player named “Crownnginger” won it for $161,480. The largest Main Event to date took place in February 2011, just months before Black Friday, and hosted 14,479 players in the tournament. “GIAMPP” was the winner and took home $877,949.74 as part of the three-way deal. Some of the more well-known players to have captured FTOPS Main Event titles through the years include Alec Torelli, Zachary Clark, Adam Geyer, and Matthew Waxman.