Full Flush Poker Domain Purchase, But It’s Not What You Think

The Full Flush Poker domain has been purchased by an unknown “affiliate,” but there won’t be any games to play. The defunct online poker site mysteriously disappeared last October, leaving players wondering what happened to their money. 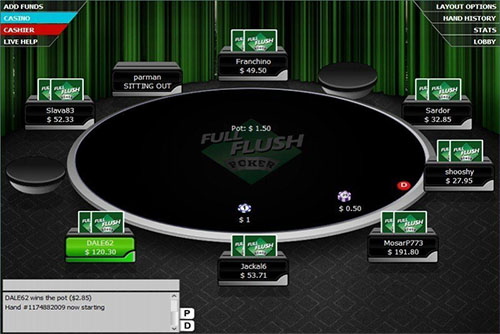 Full Flush Poker has a new site owner, but these people aren’t going to be paying back any players. (Image: safestpokersites.com)

Equity Poker Network, the site’s parent company, reportedly owes approximately $2 million to its customers. One day, poker players were enjoying games on Full Flush Poker. The next day, it was gone, like a fart in the wind.

A week after the site first disappeared, it was referred to as “unexplained downtime.” Full Flush’s staff posted a message on social media letting customers know it was temporary. But the poker site never returned to action.

Now, it has been purchased by an unknown affiliate who wants to help players recover funds. The site was acquired via auction with an undisclosed winning bid.

What happened to the poker site is unclear. It’s difficult for any internet poker operation to compete with PokerStars and 888poker internationally. But Full Flush Poker had one advantage: it, unlike many poker sites, was available in the United States.

Equity Poker Network has gone out of business and, as the current Full Flush site claims, its owners are refusing to return phone calls and emails. Where have the owners gone?

“Sources tell us that they have relocated from the countries in which they were operating, and a number of parties were financially injured as a result of this company closure,” the message reads.

According to the unknown auction winners, the poker players aren’t the only ones who got screwed. Employees at the company’s Costa Rica office allegedly went weeks without pay and software vendors and marketing affiliates were stiffed.

There are many poker blogs and online poker review sites that do affiliate marketing. These sites get paid a commission when someone clicks on an affiliate link and makes a deposit at an online poker site. Full Flush Poker had many affiliates. According to the new domain owners, these affiliates are coming “together in an attempt to help victims of the Equity Poker Network.”

The goal of the message on the home page at FullFlushPoker.com is to “provide a means by which players might recover their lost balances.” They are asking those harmed by EPN to submit contact information and information about their situation.

They do not make any promises that outstanding player balances will be paid.

I had nearly 5k in there when they crashed, what can be done to recover that if at all possible?? Thankss