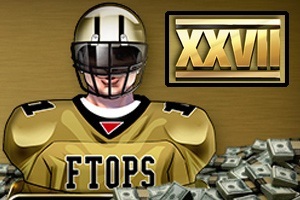 FTOPS XXVI runs from November 30 through December 12 and boasts over $4 million in guaranteed prize money over the course of 30 events. (Image: FullTilt.com)

One of the most popular online poker tournament series comes back in the form of the Full Tilt Online Poker Series (FTOPS) starting November 30, and running through December 14. This incarnation of the tournament series is dubbed FTOPS XXVII and boasts thirty different events and over $4 million in guaranteed prize pools. Players don’t just have the chance to win cash, as there are extra prizes to be won, including a lucrative sponsorship.

The FTOPS XXVII runs from November 30 through December 14 at Full Tilt, formerly known as Full Tilt Poker. There are 30 events running with many major six-figure guarantees and a Main Event that boasts a one million dollar guaranteed prize pool. The schedule features No Limit Hold’em, Rush games, Mixed 10-Game, Razz, and other popular poker games.

The Main Event will take place on Sunday, December 14 at 13:30 ET and will cost players $635 ($600 + $35) to enter. This event is a No Limit Hold’em Re-Entry tournament that has the biggest prize pool of FTOPS XXVII at a cool million dollars.

Leaderboard and a Sponsorship Contract Competition

As usual, there’s a leaderboard posted on the Full Tilt website for FTOPS XXVII that tracks the records of all players entering into events. The player with the most leaderboard points when FTOPS XXVII concludes will win an exclusive four-month Black Card Pro Sponsorship contract that kicks in on January 1, 2015. Players that are a part of the elite group of grinders that have Black Card Pro status receive 100% cash back on all their play at tables, meaning that they pay no rake for a four month period.

There is also a FTOPS Satellite Hero promotion taking place where players that satellite into any FTOPS event and cash in that tournament get a little something extra. The more players qualify and cash, the more they get. If a player does it once, they get a Satellite Hero Freeroll ticket. Twice and they receive a $75 MiniFTOPS Main Event ticket. Do it three or four times and players get that same $75 ticket plus T$50 credited to their accounts. For anyone that can accomplish the feat five times, they will receive that $75 ticket, plus T$100 in their account. The Satellite Hero Freeroll takes place on Saturday, December 20 and will award 25 MiniFTOPS Main Event Tournament Tickets.