French Online Poker Eyeing Player Liquidity to Save Its Derriere 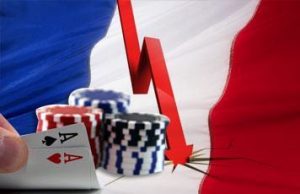 Legislators are looking to amend the French online poker bill to include player liquidity from other countries. (Image: gamblingkingz.com)

The French online poker universe has been folding faster than deuce-nine offsuit out of position. But now a new legal measure may pull that hand right out of the muck for a surprise win.

Since France isolated its poker networks in 2010, operators have struggled to maintain active tables due to deteriorating player pools.

Following a 12 percent drop in revenue for the fourth quarter of 2014 compared to the previous year, and with cash games down a whopping 33 percent over the last three years, 22 parliament deputies have proposed an amendment to bring international player liquidity to the market.

The revision requests that French online gaming regulator ARJEL “allow an operator that holds a license under section 21 to propose that players registered on the site can play in games with the players on the site of a controlled operator by another authority, one that is a Member State of the European Union.”

As the law stands, French citizens are required to play at ARJEL poker rooms, and while international players can sit down at these tables, high taxes prevent them from doing so. The proposition seeks to change that rule, allowing residents to enter foreign tables, while still paying taxes in France.

But for the leading poker room in France, international player pool liquidity might not be a good thing.

Winamax is currently home to more cash players than PokerStars, and should the government loosen its stronghold and allow players to return to a common pool, the measure could result in an influx of traffic to the world’s largest network.

As of now, PokerStars directs all non-regulated European accounts to its dot-eu domain, an attractive option for those in the country who have been confined to dot-fr sites.

Of course, it remains to be seen whether the amendment will pass, and if it does, in what form. The revision seeks to allow players to sit in rooms outside of France still regulated by EU states, but that footnote might ban the PokerStars.eu network since it includes players from outside the European Economic Area.

On top of that, not everyone is on board for the change. Twenty-two parliamentary deputies might sound like a lot, but it isn’t. In fact, it’s about four percent of the 577 total deputies in office.

Changing a law in that manner isn’t the way to go, according to certain leaders.

“We are working with the gaming regulatory authority online, ARJEL, which is the authority of these matters. It is from this perspective, rather than by a sectorial approach, that we want to address this issue,” Economy Minister Emmanuel Macron said.

Pools Across the Pond

One doesn’t need to look far to find a struggling, segregated poker territory. After both Nevada and Delaware failed to achieve estimated pre-legislation revenues, the two signed an interstate compact to share player pool liquidity last year. While a lengthy delay due to technical glitches has occurred, the collective launch is expected to roll out in the coming days or weeks.

US state liquidity is probably more vital considering population levels (Nevada’s 2.8 million residents, Delaware’s 935,000), but pool sharing is important even for a country like France with 66 million citizens. Bigger tournaments, bigger guarantees, and higher seat occupancy all adds up to a stronger market. Player liquidity is truly liquid gold in terms of revenue and financial impact, and that’s a concept France desperately needs.