I’ve already written about my favorite places for a celebration meal, but the reality of tournament poker is that most of the time, you won’t be celebrating. In those cases, you’ll need a solid bust-out meal. 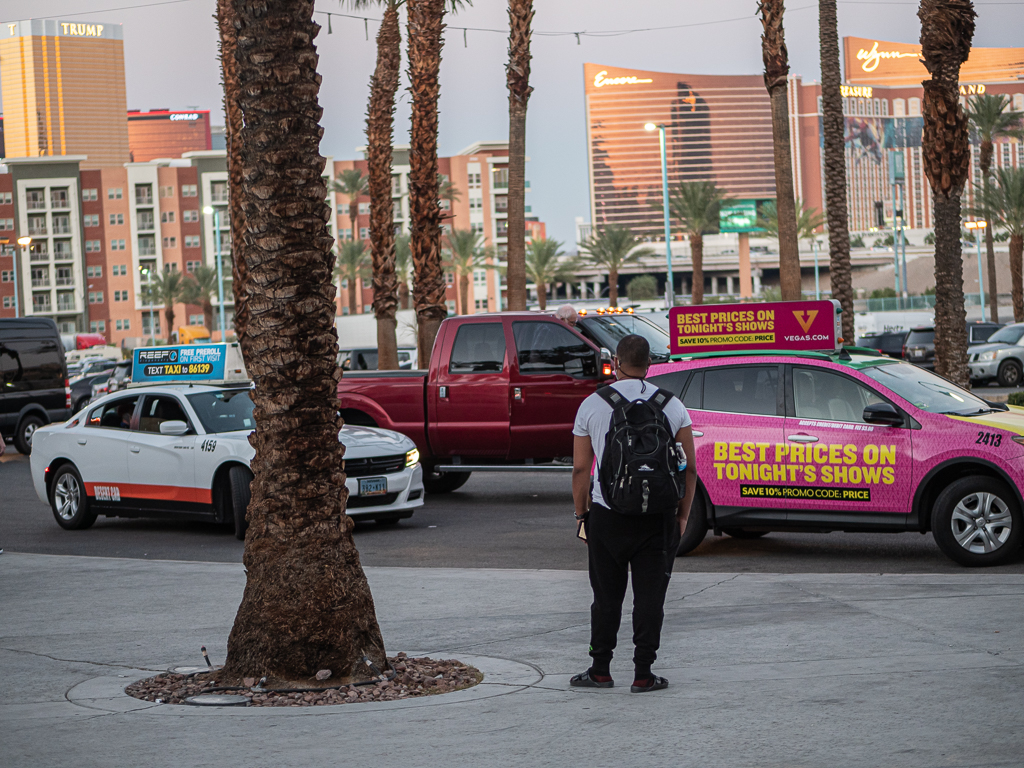 You could be inside playing, but no, that donkey had to call your raise with seven-four suited. (Image: Chris Wallace)

I’ve busted a lot of tournaments, my friends. Anybody who’s played with me will tell you that me busting a tournament is no surprise. And anyone who’s eaten with me, or even seen me from across the room, will tell you that I’ve also eaten a lot of meals. Which makes me a genuine expert on bust-out meals.

A good meal can cure the bust-out blues in just an hour or two and, in most cases, get you back in action. But different bust outs require different dining experiences, so I’ve tailored these meals specifically for the various types of bust out. And since it’s WSOP season, I’ll assume you are at the Rio.

Busted in level two of a freezeout on a cooler? Yeah, that’s no fun, but at least you didn’t invest a lot of time and energy in it right? Sure, you’re annoyed, but it’s a blip on your radar, easily cured with a light meal. And a light meal is probably all that you need because you ate before you came to play and that was just an hour ago anyway right?

Take yourself down to the little pho spot next to the sportsbook at the Rio. The walk up the hallway will be enough time for grumbling and replaying the hand in your head. Now, get yourself a big bowl of pho and just breathe it in. Before you eat it, just hover your face over it and let the steam from the hot soup warm you up and clear your head.

It’s not the best pho in Vegas — for that you would need to head down to Chinatown on Desert Inn and find a little hole-in-the-wall spot. But it’s not bad, which is a glowing review compared to most of the food at the Rio. It will be tasty enough, and won’t fill you up so much that you’ll get bogged down because you have more poker to play today. Enjoy your pho, relax at the table next to the empty bowl, check Twitter, and then head back down the hallway, ready to do battle once again.

It was six hours in and you just couldn’t get a hand. It feels like you’ll never win at poker again. You wonder how winning was ever possible. You couldn’t make a hand all day while idiots playing garbage flopped full house after full house. The mid-bust can really get you down. You’re not even angry, you’re just disappointed.

After a mid-bust, you need to get out of there. You’re not playing anymore poker today, you wouldn’t play well if you did. So get away from the Rio and head down to Nacho Daddy’s just a block off Fremont Street. Don’t be tempted to go to the one nearby on the strip; it’s not the same. Go downtown, get yourself a giant plate of nachos and a drink with some tequila in it.

Don’t get out of hand — you need to be sharp tomorrow for another tournament — just have a drink or two and destroy that plate of nachos. Take a quick walk down Fremont Street to remind yourself how fortunate you are as you watch crazy people, drunks, and clueless tourists from all over America marvel at silly light shows and half-naked street performers.

Now, go home and get to bed early. You’ll get em tomorrow.

Dammit. A bubble. Sorry man, that’s miserable. And that pain will only heal with time. You need to stop thinking about it, find some distractions, and get some time between you and that frustrating bubble finish. The best meal for distraction is something with some heat. That means either Mexican or Thai and, obviously, Mexican isn’t right for a bubble finish, so you need some spicy Thai food. You aren’t rich. In fact, you feel like you just lost money because you were sure you were going to cash in that stupid tournament. So you’ll want something reasonably priced, but still good enough that you can pack in some heat and still really enjoy it.

Get yourself to Archi’s Thai. There are a few of them in Vegas, and they are all solid. Order some curry with a spice level a little higher than your usual. It will be so good you’ll keep eating even when it hurts and you start sweating. And by the end of the meal your head will be clear, you’ll be high from the endorphins triggered by the capsaicin, and you won’t be thinking about the money you almost made.

You made the money, but you never really had a shot to win it. It’s no fun, but it could have been a lot worse. In fact, this might be the easiest type of bust out. You should have played better and pushed harder on the bubble. And now, you should be punished. You won’t learn if it doesn’t hurt.

So, for the good of your game, go down to the Poker Cafe at the Rio and buy a $14 cheeseburger off the rack. Pay cash for it, tip the cashier two dollars, and thank them for selling you such a fine meal at such an affordable price. I promise you won’t enjoy paying such an absurd price for a low-quality burger. You probably won’t even finish it, and you’ll feel terrible throwing half of it away because you paid so much. And that will hurt even more.

Did you like that? No, you didn’t. Do you want to experience that again? No, you sure don’t. No one does. Repeat business on a $14 cheeseburger off a warming rack isn’t a real thing; it just doesn’t happen. And that is great for you because, next time, you’ll play a lot better rather than suffer such a fate again.

You had a deep run but didn’t quite get there? Ouch. This one sucks. I mean it really sucks. I’m sorry my friend, I wish this hadn’t happened to you. I know exactly how you feel. You’ve just made a nice score and you hate it, and you want to complain but no one wants to hear it because you just made more money than they’ve made the whole series.

I busted on day six of the Main Event a few years ago and I wanted to throw a chair across the room. I made over $200,000 and was absolutely irate. I understand. When you get near the end of a tournament, you start to have some very unrealistic expectations about how things are going to work out.

You need a full day off, a real quality meal, and some time to chill until the reality of the money you just made sets in and takes some of the sting out of the bust out. So, head down out to The Nomad Bar at Park MGM. It’s a short Lyft or cab ride from the Rio. Bring a friend who will help remind you that you did really well. Buy that friend dinner with some of your winnings.

Now, I really do feel for you so I’m going to share a secret. Please, don’t tell everybody about this — let’s just keep it between us. Order the chicken French dip with gruyere cheese and black truffle sherry au jus and a side of brussels sprouts. This little meal is the best-kept secret in the city. I know, a chicken French dip doesn’t sound that exciting, but I promise you, it will blow you away. No other French dip will ever compare. This is the Main Event of French dips. You’ll never order one anywhere else again because it would just piss you off.

Now, you get a great meal for less than $50 that feels like it should be served to a king at a table 50-feet long. This sandwich will remind you that your life is really pretty good. By the end of the meal, you’ll be halfway to seeing the money you made instead of the money you could have made. The sprouts will also be the best sprouts you’ve ever had. And the bartenders are more like alchemists, creating new potions as if by magic, so tell them what you like and trust them to make you something that will help you through the transition from a player who just busted to a player who had a nice cash and is ready to get back to work.

Why didn’t you win? What is wrong with you? Go immediately to Guy Fieri’s El Burro Barracho and order their cheapest tequila and their biggest burrito, and ruin your night. Then head over to the hooker bar and buy some more drinks. No one wants to hear your whining. You just had a huge score and now you’re annoyed, and no one understands. Play better next time and you can be celebrating at one of the best restaurants in Vegas.