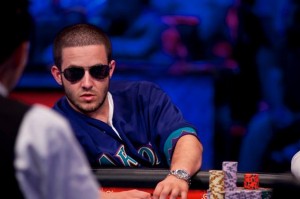 Greg Merson opened up about his financials via a Facebook post to talk about his poker winnings. (Image: wsop.com)

Former World Series of Poker (WSOP) Main Event champion Greg Merson opened up to his fans, as well as the rest of the Internet regarding his personal results at this year’s WSOP in Las Vegas, via his Facebook page. The posts represent a remarkable amount of transparency rarely seen from high-profile professional poker players. It follows a trend with Merson, who has gained a reputation for speaking his mind and being up-front when asked for his opinion. According to his Facebook post, Merson’s open book on results this year showed that he took a loss of about $129,000 during the summer.

While it’s well-known what professional poker players make in tournaments they cash in, thanks to the variety of online databases that exist, it’s never fully known what a pro makes in the end, because entries aren’t tracked, nor is side action or cash games. This is why Merson’s transparency this summer is rather unprecedented, since he is letting the world know just how much he’s won and lost.

Cash Games and Side Action

According to his Facebook post, Merson won “a bit over 100k, most came from playing online and [the] rest from some live games. I only played 5 sessions of live cash the whole summer.” He went on to say that he played 200/400 No Limit Hold’em with the likes of Dan “Jungleman” Cates and Prahlad Friedman to go up against elite competition.

Merson added that, “Buying action this summer was rough for me. Think I lost about 150k buying pieces from cash games and tournaments, maybe a bit more I’m not sure.” He concluded by saying that between all the tournaments, cash games, and buying up action, he lost $128,900, an acceptable amount, apparently, as he stated, “After having two amazing summers in ’13 and ’12 I don’t have much to be upset about…”

While there has been some back-and-forth between World Poker Tour (WPT) officials such as Tournament Director Matt Savage, and Merson, the 140-character barrier via Twitter was broken as he expanded on his thoughts via the post. His issues originate with the WPT500 bracelet event running head-to-head against the WSOP Main Event. Merson feels that the industry should respect each other’s products, and not schedule events that overlap with other major tournaments.

“For partypoker/WPT… to poach the traffic for the biggest event of the year was a little grimy,” he wrote. He went on to ask how the WPT would feel if the WSOP would conduct a $500 bracelet event on the same days and in the same city as the WPT Championship. Then he concluded the matter by saying he likes the idea of the WPT500 and will continue to play in certain WPT events, and hopefully cleared up some of his comments and explain the reasoning behind his views.

Gregory Merson is a professional poker player that gained worldwide fame by winning the 2012 World Series of Poker Main Event. He also won a WSOP bracelet in the prestigious 6-handed $10,000 No Limit Hold’em Championship and as a result of those two wins and a few other great finishes, won the 2012 WSOP Player of the Year award.

According to multiple online poker databases, he has earned well over $10.9 million in live tournament earnings in his brief career. His win at the 2012 WSOP Main Event won him a whopping $8.53 million and the other bracelet he won that same year earned him $1.13 million. He is the all-time money winner for players out of the state of Maryland and 14th for players hailing from the United States.