Poker floors catch a lot of flak. They have to make on-the-spot decisions, navigate high-pressure situations, and often bear the brunt of player angst. One man who’s done it all with a smile is 47-year-old Robbie Thompson, known to many as “Red Bull Robbie.” 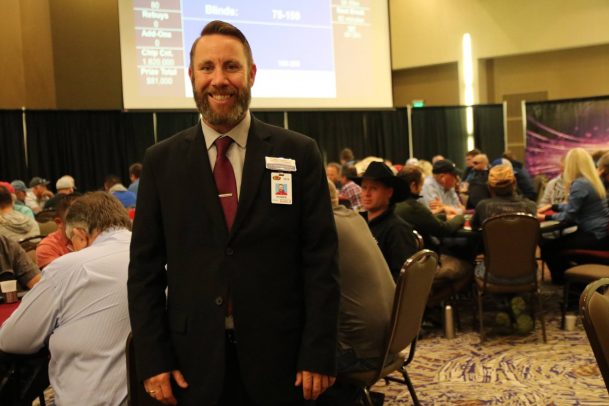 Hailing from Egan, South Dakota (Pop. 720), where he has lived in the same house ever since he was three years old, Thompson used to work manual labor, attended University of South Dakota for a year, and then in 1993 took a job at local casino as a blackjack dealer. He has been in the gaming industry ever since.

“After a couple years in the pit, I made my move to poker,” Thompson said. “I was leaving my shift one day and my manager asked if I would deal poker that night. She knew that I played, so without any training I sat in the box to a 7-Card Stud hi-lo game and the rest is history.”

In 2001, Thompson took a job at Minnesota’s Canterbury Park, and a year later left to become a traveling dealer. He dealt his first World Series of Poker (WSOP) in 2004, and two years after that his first WSOP Main Event final table. Any dealer will tell you that’s kind of a big deal.

With a solid résumé, Thompson began dealing on the EPT and WPT before applying to be a final table announcer at the 2008 WSOP.

“I told them I had mic experience and seeing how I like to sing karaoke, I wasn’t lying,” he said with a laugh. “I ended up getting the job. I was able to back up my BS and it was an easy transition with all the final table experience I had. I held that job for nine years.”

Indeed, Thompson, who also announced some EPT final tables, was a fixture at WSOP final tables, usually with a Red Bull in his hand (hence the nickname) and uttering catchphrases such as “BANG” and “POW.” Over the years he has seen hundreds of bracelets awarded, and was essentially the Bruce Buffer of poker.

“I have had many fond memories working the WSOP, but some stand out more than others,” he said. “I once worked a 21-hour shift covering the 2010 WSOP $50,000 Poker Players Championship. They even have picture of me resting on the table with mic in hand about to fall asleep. If you have ever watched David Bach play, you would understand why.”

He continued: “Doing any final table with Phil Ivey was memorable, especially the two bracelets I presented to him. I believe he is the best I have ever seen. Just his presence at the table is intimidating. Never have I seen another player that has such an aura about him. He is the definition of smooth.” 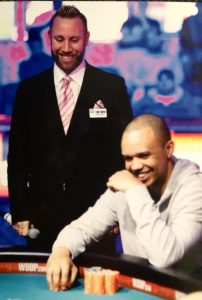 He also had a run-in with the other Phil.

“I gave Phil Helmuth a one-round penalty deep in the Main Event one year. It was as play ended for the day, and he was supposed to start the next day on penalty after he blew up at a player and called him all kinds of names.

“Needless to say, he managed to whine to the right person and had it lifted by the time play resumed. I learned after that that not only do these pros expect special treatment, unfortunately they get it. I can honestly say that they didn’t get it from me.”

From Las Vegas to Grand Falls

“I have got the opportunity to travel all over the world because of my career,” he said. “In 2017, after getting sick of traveling and some circumstances that were out my control, I took a job at Grand Falls Casino as a poker room supervisor.

“Ironically enough, it was for Renee Thomas, the same lady that put me in as a dealer for the first time some 25 years earlier.”

Thompson, who has two daughters, MaKenna and Morgan, is happy to bring his experience to Grand Falls Casino, which is situated just outside Sioux Falls, South Dakota.

“The people here are some of the friendliest I found,” he said. “They are also very accommodating to my guiding career, and I am happy to be close to home amongst family and friends.”

Thompson, who lives with his girlfriend, Dori, and her two kids, Kooper (6) and Kaylee (4), is a big outdoorsman, which he says is his true passion. He says he’s into hunting, fishing, camping, canoeing, hiking, and kayaking. For the past 15 years, he’s also been a pheasant hunting guide and has trained hunting dogs on the side (he has four of his own). 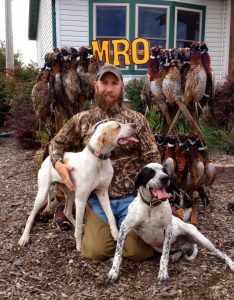 “I enjoy making diamond willow walking sticks, canes, and shooting sticks,” he said when asked about his hobbies. “Others include karaoke, playing cards, pool, and teaching the next generation about the great outdoors.”

While he doesn’t use it often, Thompson is also on Twitter @RedbullRobbie. Funny story about that, it was originally set up as a parody account by members of the poker media before they allowed Thompson to claim it as his own.

“I was popular with the media from the start,” explained Thompson, who said he averaged a dozen Red Bulls (which he got for free) a day during the WSOP.

“The media gave me the name Red Bull Robbie after seeing how many I would drink in day. They even did a by-the-numbers segment on me where they counted 17 one day.”

This has to be one of the best articles I’ve seen in a long time!!! Yes Robbie is a true professional!! Pretty cool cousin too!!

All I can say as his Mother, is that I am so very proud of him & enjoyed reading this commentary of his career! I was able to come to Las Vegas a couple of times & watch him as a Final Table Announcer & also watched him many times on the internet (live)!