Golfer Shane Sigsbee spends more time these days playing cards than trying to shoot under par. The Las Vegas Review-Journal profiled the Texan’s switch from the green links to the green felt. 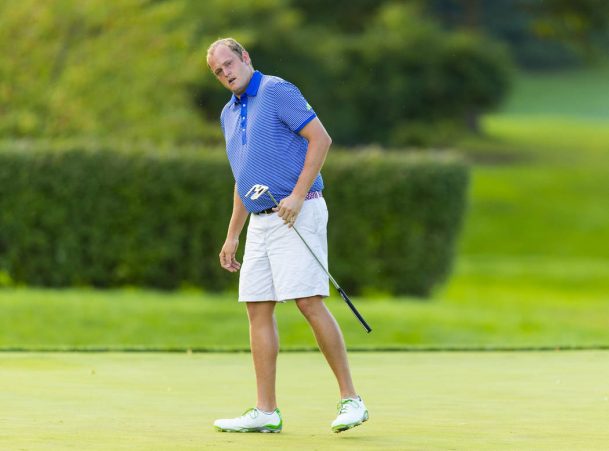 Shane Sigsbee owns a poker-backing company to help poker players get the capital they need to play cards. (Image: raketherake.com)

The story, as told by columnist Ed Graney, goes as follows: the 32-year-old Sigsbee went from golfer to day trader to creating a Las Vegas-based company that financially supports poker players.

Although golf no longer consumes his life, he still planned to compete in a U.S. Open trial in Henderson, Nevada on Monday.

Sigsbee is the co-founder and CEO of IMAWHALE Staking Group, a company that financially backs poker players. His co-founder, Eric Deutsch, and his employees all have a business and poker background.

IMAWHALE’s goal, per the company website, is to develop clients into “winning poker players,” and give them “the support system they need to succeed.” The company provides the capital, coaching, and management online poker players need to thrive.

Poker players must apply to be staked. Sigsbee doesn’t accept just anyone. They are required to share personal information, hand histories, and references.

If the application is approved, IMAWHALE then provides the player with the necessary capital.

Where He Got the Idea

By the time he graduated from Notre Dame University in 2007, Sigsbee’s love for golf had diminished. He took a job as an equity derivatives trader in Chicago.

That victory inspired him to play more poker and travel to different events. Along the journey, Sigsbee learned from speaking to other poker players that obtaining a backer was common practice. Conversations with other poker pros led to what turned out to be a brilliant business concept.

“Successful traders started the company I had worked for and backed our traders. I thought, ‘Why not find some talented poker players and back them like traders?’ I started backing three guys in 2010, am up to about 60 now and feel like I haven’t worked a day in the last seven years. I just enjoy the interaction with poker players and figuring out how best to optimize our operation,” he told the Las Vegas Review-Journal.

Sigsbee’s idea of operating a poker-backing business is a unique concept. But there are many individuals who stake poker players.

Some poker pros ask friends and family for money to play tournaments or cash games in exchange for a portion of the winnings. Others seek out investors or other poker players.

It’s no secret that many of the high stakes players have backers. In fact, in many high roller tournaments, some of the players have very little, if any, skin in the game. Daniel Negreanu is a rare exception. He announced he will have nearly $1 million of his own money on the line this summer between the WSOP and other high stakes tournaments such as the Super High Roller Bowl.

But then there are pros such as Doug Polk who often seek backers to help minimize risk. The popular poker streamer is currently in Vancouver, Canada competing in the PokerStars SCOOP series. He sold off part of his action on StakeKings.com, a poker crowdsourcing platform.