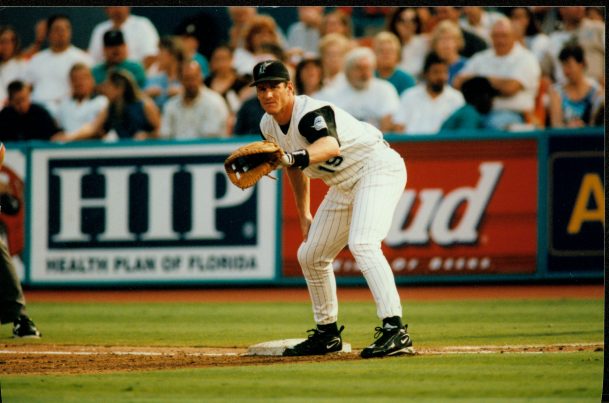 The event will award cash and prizes to the top 10 finishers, with proceeds benefiting the Conine Clubhouse at Joe DiMaggio Children’s Hospital in the host city.

Conine is a beloved figure in South Florida. He spent eight seasons with the Florida Marlins including the team’s inaugural season in 1993 and was a member of two World Series championship squads (1997 and 2003).

During his time with the Marlins and after retiring from baseball in 2007, Conine and his wife, Cindy, have been passionate about giving back to the community.

Conine’s Clubhouse serves as the “home away from home” for families of children receiving medical care at Joe DiMaggio Children’s Hospital, providing a free stay in a “comfortable and nurturing environment,” according to the charity’s website.

“Cindy and I stayed at the clubhouse when our son was younger and know firsthand the importance of being close to the hospital,” the baseball star told the South Florida Reporter. “It provides all the amenities of a three-star hotel but, more importantly, gives families a temporary place to call home when they need it most.”

The charity event winner will receive $5,000 and a $5.250 seat in the Seminole Hard Rock Poker Open Championship on August 11.

Entry to Conine’s tournament requires a $300 donation and includes access to a VIP reception and silent auction at 5 pm. Cards will be in the air at 7.

Players can reserve a seat online at ConinePokerClassic.org or donate with cash at the Seminole Hard Rock Hotel and Casino on the day of the event.

Anyone age 18 and above are eligible to enter the charity tournament. A list of celebrities attending hasn’t been finalized, but Conine said he will compete.

Jeff Conine spent all or parts of 17 seasons in the big leagues. He debuted with the Kansas City Royals, the team that drafted him out of UCLA, in 1992 and then was selected by the Florida Marlins in the expansion draft the following year.

Conine was given the nickname “Mr. Marlin” for his long tenure on the field with the Marlins and activity in the South Florida community. He played for five other teams, including six seasons over two stints with the Baltimore Orioles.

In 2008, after being released by the New York Mets, he signed a one-day contract with the Marlins so he could retire as a member of the organization.