Anyone who came to the MSPT Grand Falls Main Event last weekend looking for fish, may have been surprised to find a fisherman instead. Not to mention one who knows all about how to use hooks to lure his catch, whether in the deep blue or on the felted green. 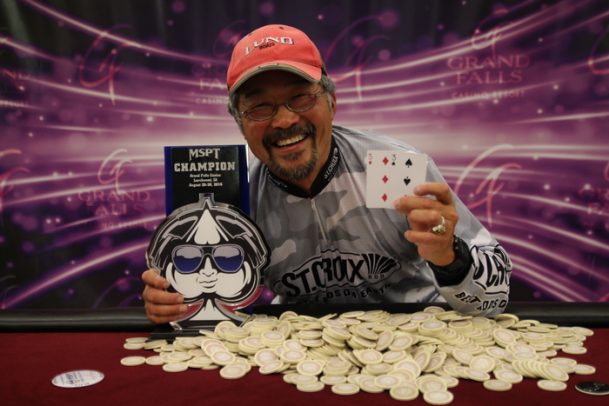 And unsuspecting players didn’t come up against some weekend warrior who goes out on a rowboat to fish, either. Nope, 58-year-old Ted Takasaki, a walleye angler who was a 2010 inductee into the Freshwater Fishing Hall of Fame, topped a field of 187 entries to win the Mid-States Poker Tour (MSPT) Grand Falls Casino in Larchwood, Iowa. In case you haven’t been to Larchwood, it’s just outside of Sioux Falls, South Dakota, for reference.

The South Dakotan father of three took home $52,360 for his victory, but it was clear that winning his first poker tournament was what really meant the most to Takasaki.

“Poker’s a hobby for me, fishing is my profession,” Takasaki said after the win. “I get a big high every single time I win a pot.

“This is the biggest win I’ve ever had by far. I play online a lot, come out to the casino quite a bit. This is equivalent to the first $100,000 fishing tournament I won. I was jumping up and down. It was exciting.

“It was exactly how I envisioned being a professional fisherman would be like back when. This win is exactly the same euphoria, the same kind of emotion. It’s like the culmination of all the work I’ve done,” Takasaki said.

Ironically, many poker players turn to fishing to escape the grind of the game and clear their heads. It’s relaxing, gets them outdoors, and is another activity requiring a great deal of patience. But for Takasaki, it’s the exact opposite. He says he enjoys getting off the waterways, and instead, probing the mysteries of the green felt.

“My work is my fishing business, so in the winter, I’m doing seminars and attending sports shows,” he explained.

“During the summer, I’m [involved in] fishing tournaments or shooting television. Everybody asks why I’m not fishing the weekends. I say why would a plumber fix a toilet on the weekend? I love fishing, but poker is my hobby. To take a hobby and win a tournament like this is incredible.”

As for what he’s going to do with the money, Takasaki looks forward to playing, you guessed it, a little more poker.

“I think I’m going to start a poker bankroll,” Takasaki replied when asked what he’ll do with the prize money. “I’ll use that money to fund my hobby and see where it goes. I’m not one to spend over my means, but I would love to continue to play a few more MSPTs and travel a little bit.

“My dream right now is to win Angler of the Year on one of the big fishing circuits, and another dream is to fish the WSOP.”

It began when Phil Mader, who some may recognize from past broadcasts of the World Series of Poker on ESPN, moved all in for 110,000. Chris Burke, who had been crippled by the hand before, called off his chipstack for just 10,000. Keith Ehlers then three-bet all in for 178,000 from the small blind, while four-time WSOP Circuit ring winner Mark Fink, who had them all covered, called from the big. The pre-flop hands were:

Fink actually had the best hand, and he didn’t give the other players much of a sweat when the flop came down 8♠7♣7♥ to give him a full house. The 6♣ turn left the other three drawing dead, and they all hit the rail after the 6♠ completed the board on the river.

The hand marked the first time in seven seasons on the MSPT that three players were eliminated in the same hand at the final table.

From there, MSPT Season 6 Player of the Year Mark Hodge, as well as Joe Barnard, were eliminated in fourth and third place respectively, and that set up a heads-up match between Fink and Takasaki.

Things went Takasaki’s way the entire match, including the final hand, where his pocket threes held against Fink’s ace-eight all in preflop. No hooks needed, as it turned out, to catch a big one this time.

Must be nice, lucky him..

I had no idea about this. Pretty interesting subject for sure though.