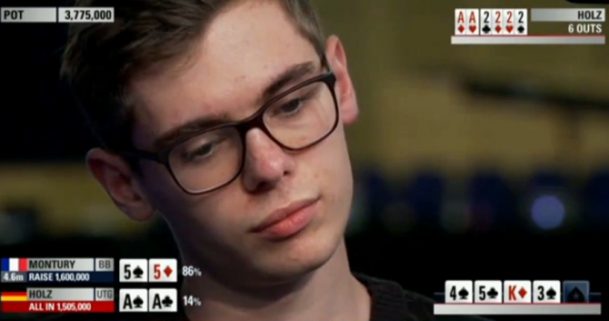 Fedor Holz has a slim lead over Justin Bonomo in the 2016 GPI Player of the Year race. Both men have had incredible performances throughout the year. (Image: youtube.com)

Holz has achieved the top spot in a year he claimed to have retired. He’s still playing poker, but not as much as in the past. This summer, Fedor decided he wasn’t going to play a full WSOP schedule. Later in the season, he announced his partial retirement at the ripe old age of 23.

He continues to lead the Player of the Year race, despite having exactly zero tournament cashes since late October, and only three since the WSOP. GPI accounts for all recorded live poker tournaments around the world. Players receive points based on finish and tournament buy-in.

At the end of the year, the player with the most points is dubbed Player of the Year. Dan Colman won the award in 2014, thanks in large part to his win in the $1,000,000 buy-in WSOP Big One for One Drop. The defending champ, Byron Kaverman, won’t even finish in the top 100 this year.

Jason Mercier won 2016 WSOP Player of the Year after having a summer to remember. But, as well as he ran at the WSOP, Fedor outperformed him this past summer.

His good run began with his June 2nd place finish in the $300,000 buy-in Aria Super High Roller Bowl for $3.5 million. But that was just a warmup for the German pro.

Then, just before the WSOP Main Event started, he won a bracelet in the $111,111 One Drop High Roller, in which Holz snagged the largest win of his career ($4,981,775). Then he “retired” and decided to show up in Barcelona for the EPT Super High Roller in August. And, of course, he won that event for a nice retirement fund of $1,473,127.

Bonomo, Nevada’s all-time winningest tournament player, had a pretty darn good year as well. In any other year, he probably wins GPI Player of the Year.

The so-called “social justice warrior” finished in the top three in four WSOP events, but didn’t win a bracelet. Had he won just one of those, he likely would have ended up ahead of Holz.

Earlier this month, Bonomo finished 5th in the WPT Bellagio Five Diamond World Poker Classic ($345,272). In November, he was runner-up in the Super High Roller event at the Asia Championship of Poker ($721,392). It’s been a great year for him, just not quite as great as it was for the amazing Fedor Holz.