Federico Butteroni, 2015 WSOP November Niner, Has to Get Lucky at Tables and Fast 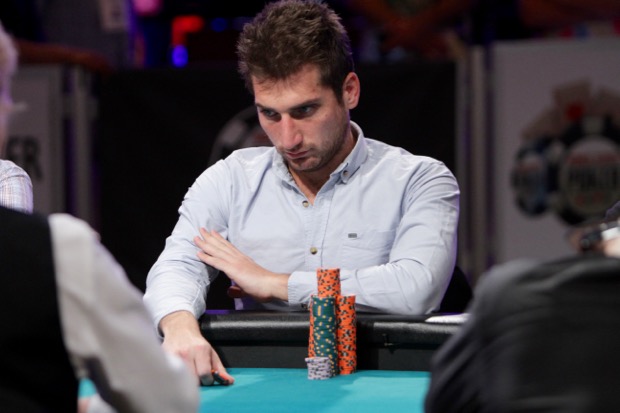 Italian Federico Butteroni will have the smallest stack when play resumes at the 2015 WSOP Main Event, and won’t have the planned-on help of super-coach and 14-time World Series bracelet winner Phil Hellmuth on his side, either. (Image: pokerlistings.com)

Italy’s Federico Butteroni will be at a big disadvantage when the WSOP Main Event resumes November 8 at the Rio in Las Vegas. Butteroni will have the smallest stack (6,200,000 or 15.5 big blinds) of the November Niners gathered when he sits down at the felt to play.

Possibly counteracting his chip disadvantage, the 25-year old Italy native was supposed to be getting some help from a legend in the form of one poker icon known as Phil Hellmuth, who was going to be giving him hands-on coaching.

Unfortunately for the young Italian, Hellmuth has since backed out due to previous commitments with ESPN’s television coverage of the WSOP.

Butteroni had planned to spend five days in New York City receiving intensive training from the 14-time WSOP bracelet winner, but alas, that is not to be.

But the Poker Brat remains in the Italian’s corner, and said on Twitter he will be rooting for him.

Of course, all the coaching in the world would still make it difficult to overcome a 10:1 chip disparity between him and chip leader Joe McKeehen, but it’s certainly not impossible.

And Butteroni will have more support than just Hellmuth, because folks in his country of origin are likely to be glued to their TV sets, rooting for their home boy. He is just the second November Nine participant to hail from Italy. The last one, Filipo Candio, finished fourth in 2010. But the odds are stacked against Butteroni matching Candio’s performance.

Although the $1,001,020 Federico Butteroni has won in the 2015 WSOP Main Event so far has been the current outlier to his poker career, this isn’t his first cash. He also finished in the money in three other WSOP events this year, including one at WSOP Europe.

Clearly, the Italian player has shown he knows how to maneuver through a massive poker field. Of the 6,420 participants who took a shot at the Main Event gold bracelet, only nine players remain standing, one of those being Butteroni.

On June 24, Butteroni beat another massive field in a $235 daily deepstack event at the Rio during the WSOP. There were 857 participants. He was the last man standing, winning $31,756.

Prior to the 2015 WSOP, Butteroni had no big live tournament wins. However, he has shown the world he is a large field specialist. Few poker players have ever made it through so many huge fields within a month’s time.

Federico Butteroni will have as much pressure as anyone at the final table. Maybe even more. Having the support of a legend such as Phil Hellmuth adds to the extreme pressure that comes with being a November Niner.

On top of that, he’ll be playing for an entire country. Never has Italy claimed a WSOP Main Event title, despite breeding many great poker players over the years.

Country pride is a big deal at an event such as the World Series of Poker. If Butteroni can rally from a massive chip deficit to claim the $7.6 million first place prize, all of Italy will undoubtedly celebrate.

Hellmuth backing out of coaching Butteroni may or may not have an impact on his performance at the final table. With such a small stack to begin with, coaching from a legend would likely only have gotten him so far. His priority will be to double-up at least once and post-haste to boot.

If Butteroni is able to overcome the odds to win the Main Event, he will become an instant hero in his home country. And now, without Hellmuth’s previously promised tutelage, that goal has become even more challenging.