Exclusive: Ultimate Poker is Positively Made in America

Editor’s Note: CardsChat reporter Jennifer Newell sat down recently for an  exclusive interview with Ultimate Poker’s Chief Marketing Officer Todd Kobrin. This article is based on that interview. 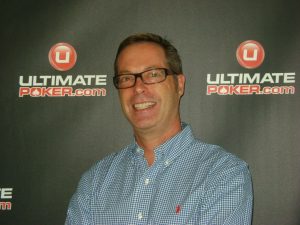 Ultimate Poker’s Todd Kobrin, the company’s new chief marketing officer, has a message for online poker players: Ultimate Gaming is made in America from the ground up. And there are big things coming up that will make players want to be a part of the Ultimate Gaming family.

Our last article for CardsChat about Ultimate Poker mentioned the departure of several Team U-sponsored players, as well as concerns on forums like 2+2 regarding customer service since the departure of Terrence Chan as the Director of Player Operations. Kobrin reached out to address those concerns and give CardsChat readers a sneak preview as to what they can expect in the next few months.

Unique and Made in America

Of all of the companies offering online poker and gaming in Nevada and New Jersey, which constitute the two primary Internet gaming markets in the US thus far, Ultimate Gaming is the only one that is fully made and operated in America. From the software to the employees, Ultimate is an all-American company that specializes in the needs and wants of American players in the newly emerging market.

While other companies have years of experience in the European and other markets around the world, Ultimate Gaming hired some experts from those companies to comprise the company for the new US market.

Kobrin also pointed out that Ultimate Gaming “didn’t have the advantage of partnering with a Borgata or WSOP that had very well-known, trusted, land-based platforms with huge databases of poker players.” Ultimate’s land-based partners didn’t have the reach of others, and as Kobrin put it, “we started from zero and built something that is long-lasting and continually improving.”

When Terrence Chan left his position as director of player operations at Ultimate Gaming, there was a gap in the company’s presence on forums like 2+2 and some players complained that customer service was lacking. It was a complaint that was unusual for the company that had always received high rankings for its excellent customer service in both Nevada and New Jersey.

Kobrin clarified that Chan departed Ultimate in order to focus on his career in Mixed Martial Arts. “He’ll be missed,” said Kobrin. “It was obviously a great loss for our company, but Ali has taken over the role with customer service.”

Ali Hajjafar was a professional poker player for several years in Las Vegas, playing outside of the spotlight, but making a living at the tables. When he joined Ultimate Gaming, he worked with Chan for five months before moving into a different department. But when Chan announced his departure, he specifically chose Hajjafar to replace him.

“He felt that I would continue his vision,” said Hajjafar. “We take pride in how quickly player issues are addressed, answering emails in under 20 minutes and handling most issues quickly by live chat or phone. We are IT people and poker experts, and it shows in our ability to handle player problems and questions.”

Since Chan left the company, “Ultimate Ali” has taken over in the 2+2 forums. “I’ve been very active in answering player questions and discussing new promotions,” Hajjafar noted. “Most complaints are regarding specific problems, in which case we direct them from the forums to a customer service agent that can handle their individual problems. But I plan to continue to be active and be there for customers wherever they are.”

Where Did the Pros Go?

Antonio Esfandiari remains the brand ambassador for Ultimate Poker, and others pros, like Jason Somerville, Dan O’Brien, and Danielle Andersen, continue to represent Team U. The names who left recently included accomplished pros like Jeremy Ausmus and William Reynolds.

“I can’t really talk too much about that decision,” Kobrin responded. “Most of those decisions were made prior to my taking this job.”

He went into further details, however, about the source of the cutbacks. “The online gaming market had projections of $500 million a year in revenue for New Jersey and $80 million a year in Nevada. The real numbers were far from that. Ultimate put together a whole marketing strategy based on the projected numbers given to them, but as the year went by, the numbers came in and weren’t close. The original strategy put in place was for a much bigger market.”

Kobrin was enthusiastic throughout the conversation about the positives of Ultimate Gaming and improvements that will hopefully take the company to a new level. While he insists that market share and competition with other online gaming companies isn’t his priority, the improvements on tap reflect a hope to win over more players and garner a bigger piece of the growing pie.

He mentioned the Ultimate Poker Live series of tournaments that are currently taking place at Station Casinos in Las Vegas, all leading up to the live final at Green Valley Ranch on September 13. Antonio Esfandiari, as well as the other Team U pros, will be in attendance. In another upcoming promotion to combine live and online poker action, there will be an event in downtown Las Vegas with players competing live but on their laptop computers.

Kobrin mentioned the September reload bonus of 100 percent through September 12, as well as the success of the recent Triple Play promotion.

Most importantly, however, is Version 3. The new software update will include a mobile product. Kobrin initially noted that the mobile online poker and casino offering would be available by mid-October, but he later adjusted that prediction due to the need to wait for regulator approval in Nevada and New Jersey, which has the potential to push the launch past October.

“You’ll be pleasantly surprised when you see our new Version 3 mobile software,” Kobrin mentioned. “The mobile casino will offer more games than any other operator in the market. We see the power in the future of mobile gaming, and we’re very committed to it.”

He then added, “We are working on multiple platforms and addressing issues that will make online gaming better for MAC users and mobile players.”

Moreover, Kobrin would like the poker media and those looking at Ultimate Gaming to focus on the positive. “We’re working on some amazing software updates and recently improved geolocation and added more payment options for players. Since we are the little guy, you’ll see a lot of innovative and interesting promotions that other companies aren’t doing, especially in Nevada with the live and online poker experiences merging. Players will see big improvements to our product in the near future, as well as the top customer service they’re used to.”