David Baazov, who once led the very company he is now trying to buy out, has made a formal offer to buy the PokerStars parent for CAD$3.48 billion (US$2.56 billion). With the ambition to take Amaya Inc. private, Baazov remains buried under a landslide of insider trading charges by Quebec financial regulator AMF. 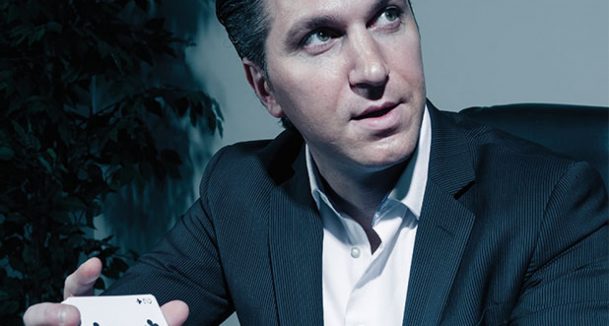 David Baazov’s bid for Amaya has shocked industry observers who believed it to be dead in the water. The former chairman and CEO’s yet-to-be-tried securities fraud charges in Quebec may make the transaction difficult to pull off, but he claims to have hedge fund backers. (Image: Sharp Magazine)

Baazov initially announced he was preparing a takeover bid at the beginning of February but just two months later, was charged by the AMF, the Canadian equivalent of the Securities and Exchange Commission (SEC) with five counts of securities fraud.

He continues to protest his innocence of these charges, but resigned from his role as the company chairman and CEO. He does, however, remain Amaya’s largest shareholder, holding around a 17.2 percent stake, including options.

Last month, as Amaya was being courted by William Hill in an ultimately aborted merger proposition, sources close to the negotiations told Reuters that Baazov had abandoned his bid.

But on Monday morning it was back on. Baazov’s proposal would value the company at around C$3.48 billion ($2.56 billion), with the offer price of $24 per share representing a premium of 30.9 percent to Amaya’s Friday close of $18.34. Baazov has also offered to pay US$200 million toward a deferred payment the company owes to the former owners of PokerStars, as part of the latter’s 2014 buy-out of the company.

The offer has been made on behalf of a to-be-formed entity led by Baazov, while four hedge funds have committed C$3.65 billion to help the new entity buy Amaya, the former Amaya CEO said. The higher figure represents associated costs to close the deal.

“As the online gaming industry continues to mature, I believe that it is in the best interests of Amaya to be positioned as a private company,” Baazov wrote in a letter to the company’s board. “While Amaya incurs the substantial costs and scrutiny associated with being a reporting company, it obtains no benefit from being public.

“The value of the transaction should be particularly compelling to Amaya’s shareholders given that no other viable alternatives were identified during the nine-month strategic review,” he said in the filing.

Amaya said today that there could be no assurance that Baazov’s offer will ultimately result in a completed transaction. While the offer itself could be compelling, it remains a huge risk for the board. Baazov is expected to go to trial and he could face up to five years imprisonment if found guilty. He has filed a written plea of not guilty to each of the five charges he faces.