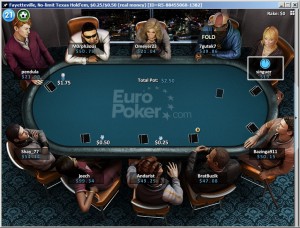 EuroPoker parent company EPMEDIA has filed for bankruptcy, and was scheduled to meet in the Bobigny court to discuss the matter earlier this week. The news was reported by ARJEL, the regulating authority for online gambling in France, on its website.

EuroPoker recently attempted a migration from the Ongame France network to iPoker France, in order to share player liquidity with other French operators, but the move fell through and they have since been unable to honor financial obligations.

ARJEL stated that the court, upon confirming EPMEDIA’s insolvency, will appoint a Judge-Commissioner to oversee the matter, and a liquidation service will determine any assets that may be sold in order to refund player balances and pay off outstanding debts.

After EPMEDIA’s assets and liabilities are examined, the claims process will move forward and the liquidator will prepare a claimant’s list for the Judge-Commissioner, which will include the names of poker players seeking account refunds. In accordance with their mission of consumer protection, ARJEL will then be tasked with ensuring that the company lives up to a signed guarantee to refund player balances, to the exclusion of player points, unexpired bonuses, and tournament tickets.

Although the EuroPoker situation may lack the generally scandalous nature of the Full Tilt fiasco, readers here who applied for refunds through Garden City Group may be experiencing a bit of déjà vu. Not surprisingly, France’s procedures for handling the EuroPoker matter were put into place after their own investigation of Full Tilt, and ARJEL will similarly provide a website to keep claimants up to date.

As the reasons for EuroPoker’s failure are brought to light in court, it would not be surprising if some connection could be drawn to the general plight of regulated poker operators and players in France. The market is currently hampered by a tax rate of 37 percent, limited game variety, and the ongoing reluctance of the French government to allow for international player liquidity.

To compound the problem, ARJEL’s new president Charles Coppolani has taken the attitude that poker’s popularity in France is simply on the wane, rather than taking a hard and honest look at the real reasons why a growing number of French poker enthusiasts and professionals are playing on illegal websites or moving out of the country, essentially becoming poker refugees.

If regulated online poker is to thrive in France and other jurisdictions, it will likely take the work of forward thinkers like former ARJEL president Jean-François Vilotte, who understood the importance of international liquidity to both the poker community and the overall market, despite an inconvincible French Parliament. Otherwise, prohibitive policies may ultimately serve to steer players away from regulated poker offerings, and continue to stifle revenue as France has experienced.