The World Series of Poker (WSOP) is a tournament itch that nearly every player can’t resist scratching. Considered to be one of the most prestigious poker series, a WSOP win can propel a player’s career to new heights and recognition. 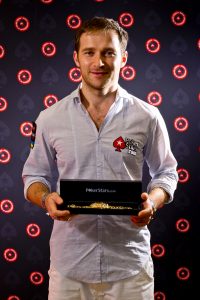 Some just love adding a new bracelet to their list of prizes. And as hard as it is to imagine that anyone would voluntarily miss out on the tournament, it does happen. But for Ukrainian pro Eugene Katchalov, his reason for being absent might be a little surprising.

Time Out for TV

Katchalov will be passing on the 2014 WSOP to participate in an upcoming Ukrainian television show. The move is a surprising one, considering the pro won a WSOP bracelet in 2011 after winning a $1,500 Seven Card Stud event for $122,909. In an interview with iGaming, Katchalov opened up on some of the details surrounding his upcoming absence.

Many will obviously question what television show Katchalov will appear on. However, due to his contract, Ukraine’s leader on the all-time money list can’t divulge any information. Fans will have to wait until sometime in the summer to find out specifics behind Katchalov’s move to promote poker within his home country.

“I agreed upon doing a national TV show months ago, knowing it would cost me most of the summer,” Katchalov said. “I think it will be fun and a unique experience and as much as I like the World Series, and as much as I hate missing it, it does take place every year. I’ll definitely be back in 2015.”

Trouble in the Homeland

Born in Kiev, Katchalov moved to the United States at the young age of 10. During his time in the states, he has earned a bachelor’s degree, majoring in Finance and International Business, and eventually became a stock market trader. Though originally a casual player, Katchalov turned pro in 2003.

Despite leaving the Ukraine at an early age, Katchalov certainly isn’t unaware of the unrest currently going on in his home country. Violence spiking across the country ahead of the upcoming presidential election over the weekend is just one of the problems the country is facing. Katchalov feels it would be wrong to pull out of the show having already agreed to do it, though.

And even with the Ukraine’s struggles, he sees that people still need some form of entertainment.

“I have no more family left in the Ukraine, just friends,” he said. “Most of my friends are in Kiev and there you don’t really feel what’s going on. You hear about it a lot of course, but you don’t see it with your own eyes.”

The pro mentions that he tries to stay informed by reading the news daily and recognizes that most of the problems are in the east of Ukraine.

Katchalov hopes that his appearance on the television show will be a breakthrough moment for poker in the Ukraine. He doesn’t consider himself a celebrity in his home country, but the appearance would likely boost his profile. He sees poker as a game that is gaining a lot of traction in the country and will enjoy the chance at promoting it.

Though he has dedicated most of his summer to the Ukrainian television show, Katchalov still might be able to put in a little WSOP time. He will be in Las Vegas during the first week of the series and he could make it out for the Main Event. Still, his absence will be missed, as he has been no stranger to earning big prizes. In 2007, he had the biggest non-championship event win in World Poker Tour history. He took the Doyle Brunson Five Diamond World Poker Classic for $2.4 million. A win at the PCA $100,000 Super High Roller event in 2011 earned him $1.5 million. Chances are, though, other players will be glad to have one less competitor at the felt.

“This summer is a freeroll for me, either the TV show goes really well or I get to play the Main Event if it doesn’t work out,” said Katchalov. “It’s a win-win situation.”

He really lost a bunch of weight