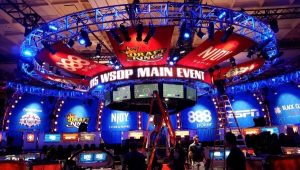 The World Series of Poker has become an annual staple of ESPN’s programming in the fall, and poker fans will once again get to enjoy their weekly doses of poker goodness starting later this month.

ESPN’s 2015 WSOP coverage will begin in August, starting with highlights from the WSOP National Championship.

That tournament will be featured in two hour-long episodes that will air on Tuesday, August 18.

The WSOP National Championship just wrapped up this past week, with Loni Harwood topping a final table that included Daniel Negreanu and several notables from the WSOP Circuit.

Unlike in the heyday of the poker boom, however, there won’t be an endless stream of episodes detailing preliminary events.

After the National Championship coverage, there are no more scheduled episodes until September 14, when the Main Event coverage will begin.

For three Mondays in a row that month, two hours of coverage will air on ESPN 2. Starting on October 4, the WSOP coverage will shift to Sundays, where the programming will be expanded to 2.5 hours starting at 8:30 pm each week.

This coverage should keep poker fans satisfied, but the schedule does come with some issues.

The episodes will be airing against one of the goliaths of television ratings: the National Football League.

While the poker coverage might make for fairly strong counterprogramming, there’s also the danger that primetime football and poker largely draw on similar audiences of young men.

The jewel in the ESPN coverage, however, is the nearly-live coverage of the November Nine.

While in previous years, the final table was played out over two days, this year will see three nights of coverage from November 8 through November 10.

The first day of final table play (which will run with hole cards on a very slight delay) will see the November Nine whittled down to just four players.

The second day will have those four play down to heads-up action, which will then take place on the 10th.

Once again, Lon McEachern and Norman Chad will be providing commentary during ESPN’s WSOP coverage.

This year’s WSOP Main Event attracted a field of 6,420 players.

While the November Nine does not contain any well-known poker superstars (Daniel Negreanu nearly made the final table, but busted in 11th place), there are plenty of storylines that will likely play out on ESPN over the weeks of coverage.

Negreanu’s deep run is sure to be one of them, as the Canadian poker pro spent much of the tournament at ESPN’s featured table.

At the final table itself, there’s plenty to talk about as well, starting with Joe KcKeehen, the two-time WSOP Circuit winner who has a big lead with about one-third of all chips in play.

There’s also the fact that the two oldest players ever to make a November Nine: the 72-year-old Pierre Neuville, who is best known for his European Poker Tour successes, and 61-year-old Neil Blumenfield.

Perhaps the most accomplished player at the final table is Max Steinberg, a bracelet winner who won his seat into the Main Event through a satellite on the daily fantasy sports site DraftKings.

Hoping to see Mr.Trooper on TV! (as long as he keeps his nipples covered… obv. )

we will have to wait till September for main event coverage ? I remember the good old days when they showed plenty of action from other events : 7 stud , with classic scotty footage ; PLO ; the players championship ;even 2-7 lowball . i’d rather see some final table coverage of similar tourneys than the seemingly endless lead ups to the final 9 . thanks to the DVR , most of us can watch NFL football and view the poker at a later time , or even during the commercials !