ESPN, the self-proclaimed “worldwide leader in sports”, has finally announced its complete 2016 World Series of Poker (WSOP) television schedule. The cable network will air episodes from the WSOP Main Event, which is down to the final nine players, and the recently concluded Global Casino Championship, beginning September 6. 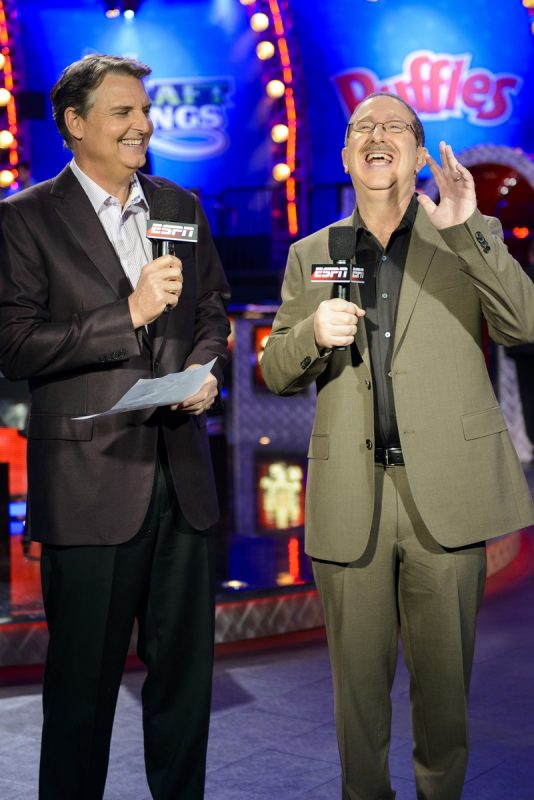 Color commentators Lon McEachern (left)  and Norm Chad (seen here in 2014) are back for ESPN’s 2016 World Series of Poker, which is set to begin airing on September 6.  (Image: espnfrontrow.com)

The first two episodes, which will air on ESPN2, will focus on the Global Casino Championship. Both episodes will be shown on the 6th. In previous years, ESPN aired WSOP episodes on Tuesdays, but the Main Event, which begins September 11, will air on Sundays at 8:30 and 10:00 pm EST  this year, leading into the “live” (with a mandated 30-minute delay) final table on October 1.

This year’s Main Event coverage will be competing against NBC’s Sunday Night Football. Day Two of the final table, on October 31, will have to battle it out for viewers with ESPN’s Monday Night Football (not to mention an onslaught of Halloween trick or treaters ringing viewers’ doorbells). The NFL is the most popular sport in the United States and difficult to compete with.

There are a couple of other changes to ESPN’s 2016 WSOP Main Event coverage. In previous years, the network began broadcasting on Day One. This year, ESPN didn’t begin filming until Day Four. I spoke to Norman Chad last month to get an answer as to why fewer days will be shown.

“Any question you can ask me about anything in television essentially leads to the same answer:  money,” Chad told me. “They save money by creating the same number of telecasts out of fewer days. So someone decided to cut out the six extra days of production costs for Days One to Three.”

There will be fewer episodes this year than in the past, but the same tried-and-true announcers in Chad and his long-time announcing partner Lon McEachern will still be doing color commentary.

In total, there will be 14 Main Event episodes leading up to the final table, which will last three days. ESPN will air the final table in its entirety, with a 30-minute delay, no matter how late it runs.

The sports network also tweaked the television set for the featured table this year, and added a techno-jib camera, which will give viewers some unique shots of the action. Kara Scott, Antonio Esfandiari, and Phil Laak will join Chad and McEachern during the final table to offer commentary.

$8 Million on the Line

The summer World Series in Las Vegas concluded last month. Only one of the 69 bracelets are still up for grabs:  the one for the Main Event.

Cliff “JohnnyBaxx” Josephy is the chip leader. He’ll take his big stack and proven poker talents, and put them up against his eight opponents, hoping to win the coveted gold and bejeweled bracelet and mostly, the $8 million first-place prize.

On November 20, ESPN will then air a condensed, edited version of the final table. This two-hour long “final table encore,” as the network is referring to it, will show the top moments from the three-day final table, including, of course, the winning moments at the end.