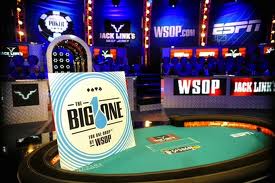 The 2014 WSOP Big One for One Drop could bring a top prize of over $20 million, beating Esfandiari’s $18 million-plus win. (Image: vegaschatter.com)

Poker players are well-known for their history of donating to charitable causes, and tragic events such as Hurricane Katrina or the 2008 earthquake in China have rallied players together to raise money for a cause, all while playing the game they love the most.

Being one of the poker world’s most noteworthy events, the World Series of Poker (WSOP) used its 2012 edition as the kick-off for one of the industry’s biggest fundraising events: the Big One for One Drop. Now the multimillion dollar tournament is returning for a second time now, and seats are already filling up fast.

A Million Drops in a Big Bucket

As a part of the 45th Annual World Series in Las Vegas, the second Big One for One Drop $1 million buy-in No-Limit Hold ’em charity event is still a little over three months away. But that hasn’t stopped over 23 participants from anteing up big bucks and confirming their seats. The seats occupying that list are full of some extremely familiar faces:

The first 17 of those names were players who came to the inaugural One Drop event two years ago. Organizers of the event first reached out to participants of the original wanting to see if there was any interest in a return. The enjoyment of their first and only experience caused nearly half of the original group of players to confirm participation for 2014’s event. The organization will now start reaching out to new players, some of whom previously expressed a desire to participate.

For reference, 2012’s One Drop event sold out with 48 entrants. Antonio Esfandiari came out on top with a record-breaking first place prize of $18,346,673 and a platinum WSOP bracelet. The win helped Esfandiari become poker’s all-time tournament money leader. Through the event, over $5.3 million was raised for the One Drop charity.

Organizers decided to add another eight-handed table to this year’s event, meaning 56 players can now be accommodated which, if the event sells out again, brings the first place prize’s potential to $20,000,000. The winner also gets a special edition WSOP platinum bracelet by jeweler Richard Mille. Depending on the final number of entrants, 16-20 percent of players can receive a portion of the prize. Seats are reserved on a first-come first-served basis by providing a deposit, and players must be 21 years of age or older.

Playing for a Title and a Cause

With participants such as Phil Ivey, Jason Mercier, and Bobby Baldwin, the competition to become a multimillion dollar winner should be fierce, especially from those wanting to claim the title from Esfandiari.

“I can’t wait to defend my title,” said Esfandiari in a WSOP press release. “The event was life-changing, but so was my trip to El Salvador after it with the One Drop organization to see first-hand what a difference the money raised from this event can do for those in dire need of help.”

One Drop’s million dollar buy-in still remains the largest ever for a poker event. With no rake and no house fees, $111,111 of each buy-in is taken out as a donation to One Drop. The organization seeks to make access to water available by all across the world, especially for those deprived of it. The Big One for One Drop event helped raise awareness of the issue and the cause throughout the poker community.

Guy Laliberté – founder of One Drop – will again be participating in the event he helped establish. His buy-in will be added among the other names yet to be confirmed for event.

“The inaugural event made history and I look forward to another historic moment again this June,” said Laliberté. “The support from the poker community continues to be just incredible.”