Erik Seidel took some heat on Twitter for blinding down a no-show opponent in the WSOP $10,000 Heads-Up No-Limit Hold’em tournament. 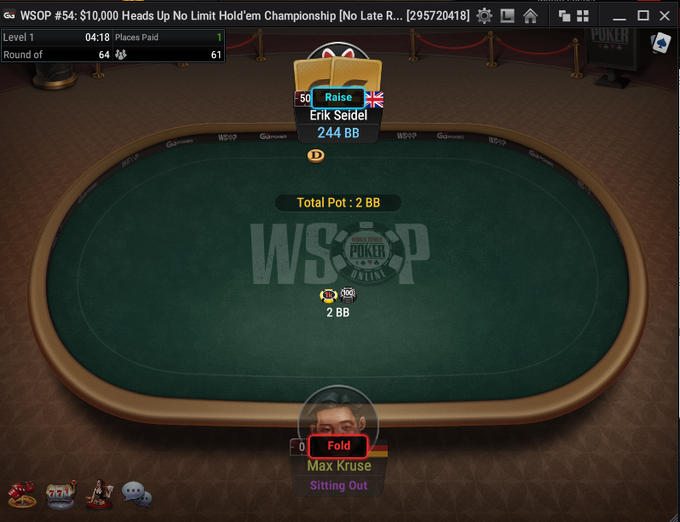 Seidel is rarely the target of poker Twitter drama or criticism. He’s one of the most respected members of the community and doesn’t often engage in public disputes. But the eight-time World Series of Poker champion found himself on the defensive on Saturday.

In the second round of the 128-player, $10k heads-up event on GGPoker, the Poker Hall of Famer faced soccer star Max Kruse. Seidel’s opponent, however, didn’t show up in time for the match and the high-stakes legend took full advantage.

Seidel had two options — blind out his opponent or stall for as long as possible until he arrived. He chose the former, which drew criticism from the poker community. Should he have chosen the latter, he would have risked giving up his edge over a recreational player while the blinds increased.

Was Seidel Out of Line?

What’s the morally correct decision when an online poker opponent disconnects or shows up late to the match? That was the topic of discussion on Patrick Tardif’s recent post.

Watching Seidel Just snap blind out the recreational is crazy to me. Ya think you know somebody. pic.twitter.com/p1s1dGFSLl

“What’re you supposed to do? Keep trading folds? How long do you give villain to get back? Ten min, an hour, as long as it takes? I don’t see any obligation to do anything here,” Eric Collier (@EricCollier30) argued.

“Is what he’s doing illegal? nope. Doesn’t change it being a cunty thing to do. Conor_1 waiting for his opponent to show up on the exact same round. We’re playing a game and there’s sportsmanship. He’s also playing a recreational, Doesn’t have to fight tooth and nail for his EV,” Tardif responded.

Twitter user @ThalloPoker wrote that it’s “genuinely surprising both given his rep and from playing with him.” He suggested instead of folding every hand, allowing the time bank to run down each hand before raising.

Seidel quickly raised each hand for about 12 minutes before the break hit. By the time Kruse arrived, nearly half his stack was gone.

A similar incident occurred earlier in the series in the $10,000 Short-Deck No-Limit Hold’em event. When wound down to just two players, Makita Badziakouski’s software froze up and he became disconnected. Lev Gottlieb decided to call for the tournament to be paused until Badziakouski was able to re-join the game. He could have chosen Seidel’s route and blinded down his opponent.

With the 128-player tournament down to the Round of 64 — two rounds away from reaching the money — Seidel made the decision to blind down his no-show opponent. Many were critical of that decision, but he responded to those critics.

“Was a mistake. Didn’t know who it was but shouldn’t make a diff. Plan was if he blinded out would give him back entry & %. It happened to me twice live. 1st time, 1st round guy waited, 2nd time was semi WSOP Europe, got blinded out for most of stack,” he wrote.

Olivier Busquet, who has competed against Seidel numerous times, defended the Poker Hall of Famer.

Are you kidding me? You think Erik is lying about his intentions? Because why? Because he cares so much about the opinions of the fucking poker peanut gallery? The real problem with this entire thread was not tagging Erik originally and simply asking him what the deal was.

“Are you kidding me? You think Erik is lying about his intentions? Because why? Because he cares so much about the opinions of the fucking poker peanut gallery? The real problem with this entire thread was not tagging Erik originally and simply asking him what the deal was,” Busquet wrote in response to a Twitter user who criticized Seidel’s decision.

Seidel eventually finished off Kruse with pocket 8s against pocket 5s, all-in pre-flop. He then advanced to the Round of 32 and was eliminated by Michael Zhang. The $10,000 heads-up event is down to its final four players — Zhang, David Peters, Alyssa MacDonald, and Michael Addamo. Day 2 is already underway and the winner will receive $360,480.