Erik Seidel continued his multi-decade dominance of the poker world this past week with a fifth-place finish in the Aussie Millions Main Event. So, for this edition of Flashback Friday, let’s look back to one of his finest moments: the 2011 NBC National Heads-Up Poker Championship. 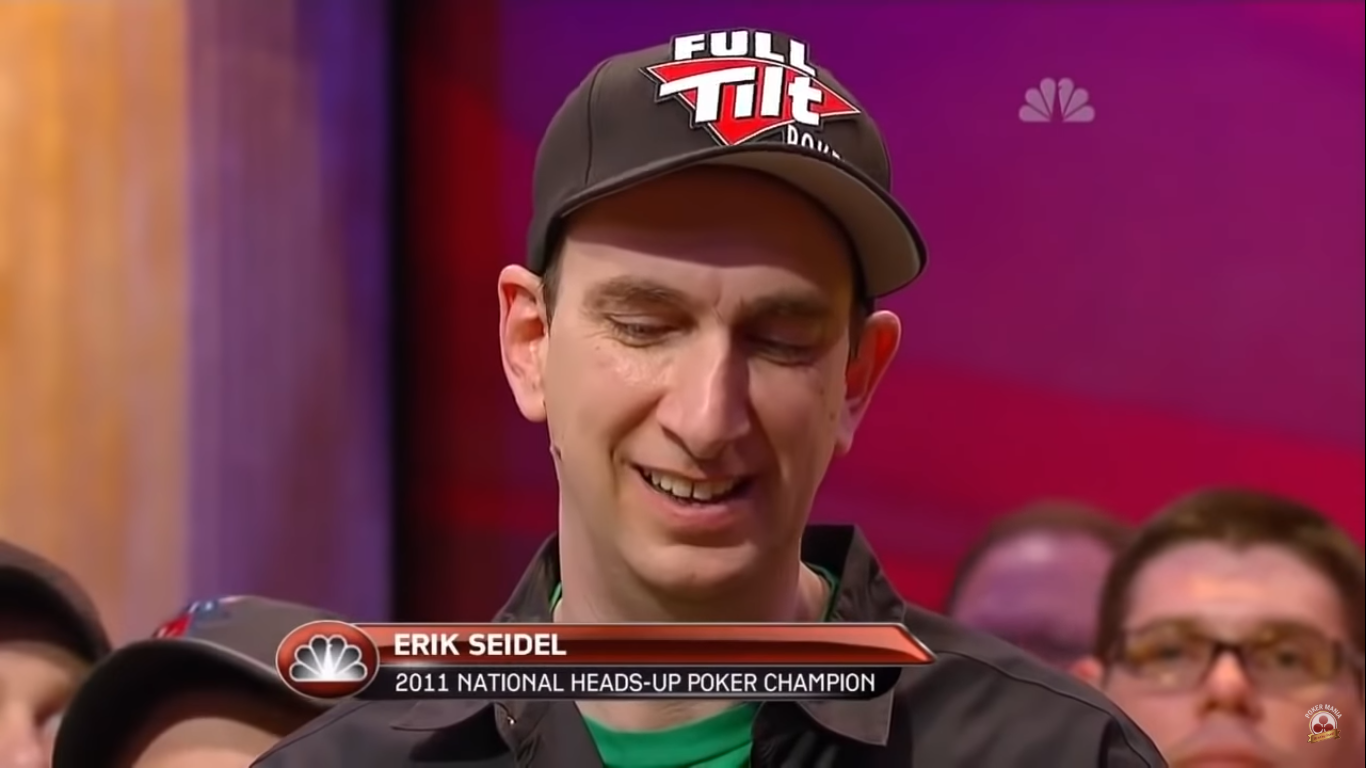 After all these years, Erik Seidel is still a beast on the felt. (Image: YouTube)

Seidel found himself matched up against 2003 world champion Chris Moneymaker in the 64-player finale. He was in this same spot a year earlier, but lost to Annie Duke for the title. Runner-up is a familiar position for the New York poker pro. In 1988, he lost heads-up in the WSOP Main Event to defending champ Johnny Chan after picking the wrong time to shove all-in — Chan flopped the nut straight.

Despite his memorable runner-up finishes, Seidel has won his share of titles, including eight WSOP bracelets. Only Chan, Doyle Brunson, Phil Ivey, Johnny Moss, and record-hold Phil Hellmuth, have more. He sought another major poker title at the 2011 NBC National Heads-Up Poker Championship.

Seidel opened the best-of-three match with a win. That meant Moneymaker would have to win consecutive games or fall short of the heads-up title. There was a significant pay jump involved with winning this $25,000 tournament. The champion would take home $750,000, with $300,000 going to the runner-up.

Moneymaker took control of the second game early, amassing better than a 2-1 chip lead minutes after it began. His aggressive play was paying off. But he picked a bad spot to bluff with pocket 8’s on a 10-5-K flop. The former world champ three-bet Seidel to 240,000, about 20-percent of his stack. With K-9 in the hole, Seidel then moved all-in, forcing a fold.

The chip stacks were back to nearly even, and both players would trade jabs over the next half hour. Seidel then picked up the aggression, bluffing Moneymaker off a few pots he could have won. But Moneymaker’s game plan was to match Seidel’s aggression. The only problem was, on a few occasions, he picked the wrong time to bluff.

Moneymaker would make one last misstep. After Seidel, who held 5-4, check-raised Moneymaker on a flop of 5-5-9, the world champ attempted an all-in bluff with K-10. Seidel made the easy call and finished off the tournament.

Coincidentally, 5-4 was the hand Moneymaker held when he won his Main Event title, hitting a full house to defeat Sammy Farha. You live by the sword, you die by the sword, right?

In securing the NBC Heads-Up title and $750,000, Seidel surpassed Daniel Negreanu for the top spot on the all-time live tournament earnings list at $14.6 million. He would hold onto that record for a couple more years before Negreanu took it back. Justin Bonomo would then unseat Negreanu in 2018 before being topped by Bryn Kenney, the current leader, last year.

The high-roller scene has changed drastically since 2011. Seidel’s $14.6 million in earnings back then would be worth just 46th place today.

Seidel didn’t stop winning big after shipping the heads-up match against Moneymaker. In fact, he’s more than doubled his career earnings to $37.5 million, good for fourth all-time behind Kenney, Bonomo, and Negreanu.

The fifth-place finish at the Aussie Millions for $261,571 this week reminded the poker community that Seidel is still one of the best in the world, and has been since the 1980s. New decade, same great player.