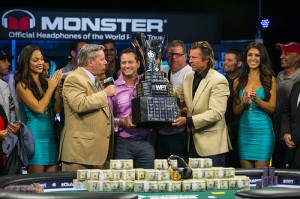 Eric Afriat bested 1,795 players at the World Poker Tour SHRPO event in Florida for a $1.08 million payday as well as a seat to the WPT World Championships. (Image: WPT.com)

Afriat won his first WPT title on his second trip to a final table on the tour, having previously finished in sixth place back in Season IX at the Festa al Lago at Bellagio in Las Vegas. Now, Afriat takes home enough to bring his total live tournament winnings to exceed $1.5 million.

When final table play began, Afriat was fourth in chips out of the six remaining players. There were certainly no slouches in the final six, as accomplished players such as Chance Kornuth, Matt Stout, Jacob Bazeley, and James Mackey sat in final table seats. The kicker was the leader in the current WPT Season XII Player of the Year standings, Mukul Pahuja, who came in as the chip leader and a near three-to-one advantage over the eventual winner. Here was the seating chart before final table play began:

Early Fireworks at the Final Table

The shortest stack, Matt Stout, had 22 big blinds and wasn’t exactly shortstacked going into the final table. Typically in this situation, it takes quite a few hands to see the first elimination. Stout had to be fist-pumping, however, when he saw Chance Kornuth move all in on Hand #14 of final table play and get called by James Mackey. Entering into the final table fifth in chips, Kornuth held KQ offsuit against Mackey’s AT offsuit. The board ran out Q-4-3-A-8, eliminating Kornuth in sixth place for $247,954.

Having bumped himself up in the expected payouts for final table participants, Stout moved all in on Hand #30 holding QT offsuit. He was called by the chipleader, Mukul Pahuja, who held A8 offsuit. Pahuja paired his eight and Stout never improved past queen-high, eliminating Stout in fifth place for $308,501.

Only 32 hands later, Jacob Bazeley made a raise under the gun with pocket aces. Afriat called on the big blind with J8 offsuit, hoping to catch a big flop. His risky move was rewarded in the form of a sick J-8-4 flop for two pair against the pocket rockets. Afriat donk bet a small amount, with Bazeley making a large raise. Afriat three-bet, which prompted Bazeley to four-bet shove his remaining 6.125 million in chips. Afriat insta-called and Bazeley didn’t improve through the river to be eliminated in fourth place for $371,931.

With three players remaining and a big jump in pay in line between the runner-up and third-place finishers, play slowed down significantly. After 86 more hands of play, on hand #148 of final table play, another elimination took place. Pahuja raised on the button, with Mackey three-bet shoving for 6.8 million on the big blind. Pahuja called with pocket nines, with Mackey turning over K7 suited. With a board of T-6-2-Q-J, Pahuja had the best hand, eliminating Mackey in third place for $441,128.

Heads Up Play Sees Afriat Win It All

Going into heads-up play, Afriat held a significant advantage in chips with 38.57 million, compared to Pahuja’s 15 million. Play did not take long to determine a winner as the fateful hand came on the seventh hand of heads-up play. On that hand, Afriat raised to 1 million, with Pahuja three-bet shoving for his remaining 10.8 million. Afriat called with pocket eights, with Pahuja showing K9 offsuit. The final board read 5-5-2-T-6, giving Afriat the win. For becoming the runner-up in the tournament, Pahuja took home an impressive $691,965. This is the second time during this season on the WPT he’s finished in second place. The good news, beyond a $691k score, is that he has a commanding lead to win the Season XIII Player of the Year honors.

Afriat, by winning the tournament, won a whopping $1.08 million along with a WPT Champions Trophy, a pair of gold Monster 24K headphones, and a seat to the WPT World Championship valued at $15,400.