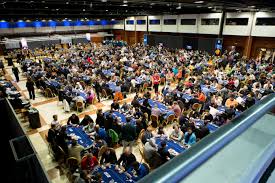 The EPT Prague €50,000 Super High Roller final table had a handful of pros, but it was a casino owner who was the last man standing. Leon Tsoukernik, owner of King’s Casino in the Czech Republic, took home €741,100 for outlasting 49 of the top poker players in his home country.

Season 13 of the European Poker Tour is currently being hosted in Prague, Czech Republic.

The €5,300 Main Event kicked off on Tuesday, the same day Tsoukernik finished off his opponents in the Super High Roller event.

The 43-year old beat out a final table that included Juha Helppi (3rd), Paul Newey (5th), and Anthony Zinno (7th). Tsoukernik didn’t have much in the way of tournament results prior to this victory. In fact, his only previous recorded live tournament cash came in 2011.

But he kept the table lively on Thursday. He joked about being the only true pro at the table even though he was the only non-pro. Despite lacking experience in tournaments, the casino owner is an important figure in the poker world.

In 2014, Tsoukernik was awarded the Industry Person of the Year at the European Poker Awards. He’s also a regular in high stakes cash games.

When the final table began, Tsoukernik had over 33-percent of the chips in play (4.3 million). But he would have to fend off some accomplished players to take down the title.

That left Tsoukernik and Charlie Carrel, a former EPT high roller winner, to battle it out for the title. Carrel, a more experienced tournament player, got his money in with A-K against Tsoukernik’s K-J. But luck wasn’t on his side on this day. The casino owner flopped a Jack and it help up to finish off his first major poker tournament win.

The EPT Prague Main Event began on Tuesday. As of middle of the day on Wednesday, more than 900 players were registered. There were two Day One starting flights. Day Two begins on Thursday.

The final table is set to take place on Monday. More than €1 million is expected to be awarded to the winner.