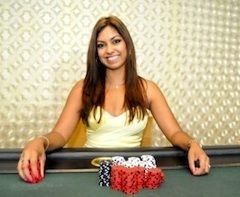 The Ladies Event at the European Poker Tour’s Deauville stop was meant to be a tournament where women, who typically make up only a small minority of poker fields, could compete amongst themselves for a change.

Sure, French law doesn’t allow organizers to ban men from participating in such events, and the very low €220 ($250) buy-in was sure to attract a handful of men who felt they were being clever by registering for the tournament.

But nobody could have expected just how many boys would come up with justifications to play in a contest that wasn’t meant for them.

By the time the entries had closed on the tournament, a total of 22 men were found to have signed up for the Ladies Event, making up approximately a quarter of the entire field.

As the tournament narrowed, the problem became even more apparent: when the money bubble hit with 11 players remaining, six of them were men.

It wasn’t all bad news for Hiatullah, as organizers realized that she might deserve a little recognition as the most deserving winner in the tournament: she was given the winner’s trophy.

But Derkx still got the lion’s share of the money, and there was plenty of reaction from the poker community over his “success” in a tournament he was never even supposed to enter.

“Those are not 22 men, those are 22 idiots,” two-time EPT champion Victoria Coren-Mitchell told PokerNews. “Having a ladies event is not about being Prime Minister or running a country…it’s not that important.”

Coren-Mitchell explained again what everyone should understand about ladies events at this point: that the goal of them is to encourage women to play in a more comfortable atmosphere where they won’t feel like the only outsider in what can often feel like a boy’s club.

“Traditionally, women don’t play poker, and that’s partially because some of them find it intimidating,” Coren-Mitchell said. “Ladies events are a nice way to create a fun event and at the same time to attract women that would not play otherwise.”

Global Poker Index owner Alex Dreyfus agreed that men should stick to open tournaments and not intrude on what is supposed to be a safe space for women in poker, calling the men who played in the tournament “bad boys.”

As the second-place finisher, Hiatullah had her own opinions about the men who played in a tournament meant for women.

“They make a fool of themselves when they play [in ladies events],” Hiatullah said. “I don’t care: as it makes the prize pool bigger, it’s fine.”

The issue of men entering events meant for women has long been an issue in the poker world, particularly since laws and regulations often prevent the outright banning of men from such tournaments.

One creative solution has been tried by the World Series of Poker, which changed a $1,000 buy-in Ladies Event to a $10,000 buy-in…with a 90 percent discount for women.

Well if it was taken in our country I would definitely try to get in.. Women are tougher to knock off from the tournaments 🙂 Maybe wouldnt even cash-out but than again experience such as this is rare to get 🙂
And my excuse would be – I have similar DNA as girls, so I can definitely partake (my dna is XXY). 🙂

come on boys, stop being jerks and let the women play.