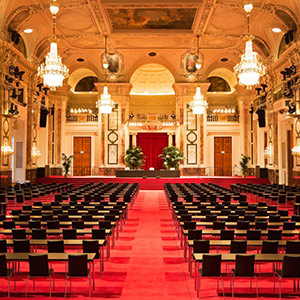 The European Poker Tour’s return to Vienna is being celebrated with a 40-event schedule, more than any other event during Season 10.

Season 10 of the European Poker Tour has been host to a number of memorable events across many of the continent’s biggest locales. The poker world has already descended upon Barcelona, London and Prague during their weeks-long events. With only a few more stops left in the current season, the EPT is pulling out all the stops for an upcoming event.

The Hills are Alive with the Sound of Poker

The EPT has announced that the upcoming stop in Vienna, Austria will have a 40-event tournament schedule, which means it will feature more types of games and competitions that any other Season 10 event so far. Running from March 19-29, this will be the EPT’s first time back at Austria’s capital since Season 7. The ten day event will be held at the Hofburg Palace, the formal Imperial residence and the most popular tourist attraction in Austria.

On March 19, the regional Eureka Poker Tour will launch the first few days of the stop with the EPT picking up events on March 23. Concord Card Casino group, who operates 15 poker rooms across Europe with more than 20 years of experience, will partner with EPT Vienna for the proceedings.

“The EPT is all about fun, celebrating the excitement of the game and gathering players together for a good time, and we really wanted to make a splash on our return to Vienna. The EPT is known for game innovation, variety and pride ourselves on providing game types in tournament format that you simply don’t find at other live events,” said Neil Johnson, Head of Live Poker Operations for the EPT.

The scheduled events at EPT Vienna are sure to please fans of all varieties of poker. Events such as €1,500 Limit 7 Card Stud Championship, €200 Limit Omaha High/Low Double Board and a €1,000 PLO Reverse Mix Max will give Omaha and Mixed game players their fix. No Limit Hold’em addicts will enjoy new game types such as €100 Deuces Wild and €100 NLHE, as well as a €2,000 EPT Grand Final Hybrid tournament which offers 50% in prize money and 50% in seats to the PokerStars and Monte-Carlo Casino EPT Grand Final in Monaco in April. Turbo and Deepstack tournaments start at €100, along with the €1,000 Eureka Main Event, €5,000 EPT Main Event and a €10,000 EPT High Roller event.

Any player that qualifies for a Main Event full package for the Vienna event on PokerStars have the chance to opt out of the hotel portion of the package, a first for the event. Players have seven days after winning to opt out of their seat, their PokerStars account will be credited with the full value hotel cost. Satellites for EPT Vienna are also running daily for as little as €1.10.

At the last EPT event in Vienna during Season 7, German student Michael Eiler came out on top of a field of 587 players, even beating out PokerStars Pro Daniel Negreanu at the final table, to win €700,000. Deauville, France is the location for the current EPT event which began on January 22 and concludes on February 1. After Vienna, the tour will move to Sanremo, Italy from April 10–20. Season 10 wraps up in Monaco at the Grand Final which takes place on April 23 and ends on May 2.