Elton Tsang Wins €1 Million Buy-In Big One for One Drop. Does Anyone Care? 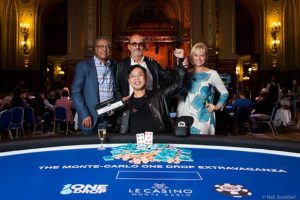 Elton Tsang is the champion of the Big One for One Drop in Monte Carlo. (Image: wsop.com)

Canadian Elton Tsang is the champion of the world’s most expensive poker tournament in history:  the €1 Million Big One for One Drop.

The charity event hosted by Guy Laliberte this past weekend took place in Monte Carlo and was only open to non-pros, which made for a small field and some angry professional poker players.

Oddly enough, the Chinese citizen is merely a few thousand dollars behind Jamie Gold on the all-time live tournament winnings list in 22nd place. Gold won the 2006 WSOP Main Event for $12 million and has accomplished virtually nothing since.

That begs the question:  since Tsang won a tournament against a small field of non-pros, should the Global Poker Index even give him credit for his winnings? Jason Mercier, the 2015 WSOP Player of the Year, would likely say no. Along with some other pros on Twitter, Mercier was critical of Laliberte for excluding pros.

But It’s for Charity

The One Drop Extravaganza, which included other high roller tournaments and cash games, was created to raise money for charity, not just for entertainment. Laliberte is the founder of the One Drop Foundation, a charity that raises money to ensure everyone around the world has access to clean water.

In both years, money was taken out of each buy-in and given to the One Drop charity, but there were more players in the field during those years than in 2016.

The buzz on social media was almost non-existent as Tsang was closing in on his big win. Many casual poker fans were disinterested in watching wealthy businessmen instead of top pros compete in a poker tournament.

Former Pamela Anderson spouse, Rick Salomon, busted in 3rd place (€3,000,000). He’s one of the most aggressive poker players around, and his style of play just earned him a hefty paycheck.

It’s Guy Laliberte’s tournament (and charity) to do what he wishes. The pros need to get over themselves.

I thought R Salomon had won millions playing poker ! how does he qualify as a non pro ?