Todd Brunson is a shooting star. Well, he was. The 2016 Poker Hall of Fame inductee had his face “incinerated,” as he likes to say, by “internet troll,” and chip leader Eddy Sabat on Day 1A of the 2017 WPT Bay 101 Shooting Star in San Jose. 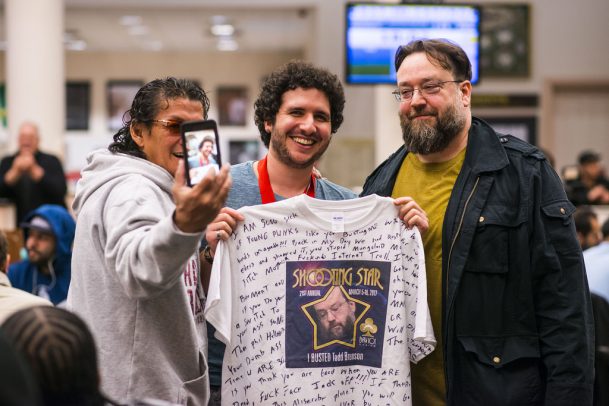 Eddy Sabat (center) holds up the shirt that eliminated bounty player Todd Brunson (right) signed for him after being knocked out of the 2017 WPT Bay 101 Shooting Star in San Jose, while Scotty Nguyen (left) takes a selfie.  (Image: wpt.com)

Doyle’s son had an up-and-down day on Monday. He got off to a good start and was up to 60,000 chips. Shortly after, he lost a large portion of his stack when his opponent cracked his pocket kings. A few lucky hands later, he was back to a respectable stack. But it didn’t take long for Brunson the Younger to have it all come crumbling down. We’ll let him tell the story.

“Very next hand I had QQ vs KQ and the Dumbass internet punk mf flops a straight. I signed a shirt for his jerk face,” Brunson posted on Twitter.

Sabat is in a dream position. He could donk off his entire stack five minutes into Day Two and still leave San Jose with a profit. In this unique event, the chip leader at the end of the day receives $10,000. The buy-in was $7,500.

On top of that, he received $2,500 for busting Brunson, who was one of the bounties. Many other familiar faces were among the bounties, including Scotty Nguyen, Erik Seidel, Maria Ho, Mike Sexton, Mike Matusow, and former NFL star Richard Seymour.

Sabat received a tee-shirt with Brunson’s picture in the center. Before heading to the exit, Todd left a long note on the shirt for the man who knocked him out. We can’t repeat that message, as we try to keep it PG here at CardsChat, but you can guess what was written from the chip leader’s comment on WPT.com, or zero in on the pic in this story.

“I just let him know at the start of the day that I wanted every expletive he could think of. I didn’t want him to change anything, I didn’t want a G-rated t-shirt. I wanted the real deal,” Sabat said.

There were 361 entries on Day 1A, and 119 bagged chips. Justin Young, a past WPT champion, has 231,000 and is the only player to eliminate two bounties: Joe Hachem and Erik Seidel.

Day 1B kicks off at 11 am Pacific Time on Tuesday. Day Two starts at the same time on Wednesday. The tournament will conclude on Friday.

Hall of famer, and sore loser. I’m sure there were many worse beats that day.