This past weekend, the 2016 Mid-States Poker Tour Indiana State Poker Championship played out at the Tropicana Evansville, which straddles the state border with Kentucky. The tournament, which attracted 340 entries (up from 225 and 251 from 2014 and 2015 respectively), attracted some of the Midwest’s best, but in the end, it was 49-year-old automobile worker Earl Potter who kept the title on home turf. 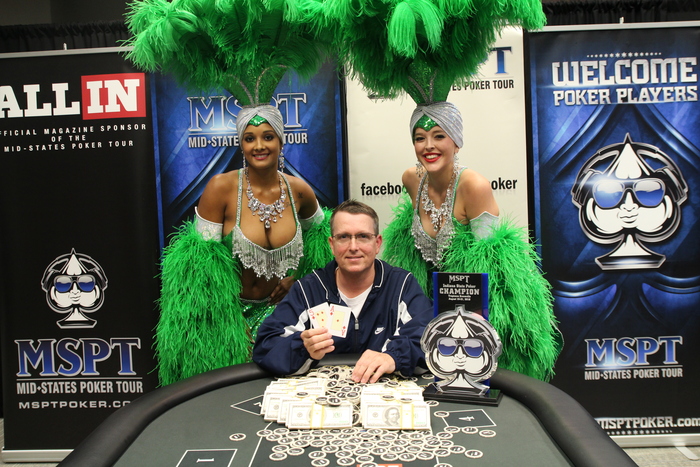 Toyota worker Earl Potter says he’s giving his winnings to his wife. He’ll probably have to once she sees this picture of him with the Tropicana Girls after winning the 2016 MSPT Indiana State Poker Championship. (Image: MSPT)

“I’m feeling awesome,” said Potter, who took home an $82,450 first-place prize. “These guys are quite a bit better than me, but you’ve got to get lucky sometimes. Make good decisions. I got lucky a few times.”

Baby, You Can Drive My Car

Potter, who works at a Toyota factory, began playing poker with his grandmother at the age of 10, though it wouldn’t be until 2006 that he would learn no-limit Texas hold’em. Over the last decade, he’s played recreationally, but it wasn’t until earlier this year that he upped his game by playing on the MSPT.

In January, the father of two finished 27th in the MSPT Tropicana Evansville Regional for $744 and his first documented cash. He was proud, but not content.

“I had a big stack going into the regional and donked them off early,” he explained. “I played too conservative. I made the money, but I didn’t go real deep, so I played a little more aggressive here. That was the plan, I did it, and it worked out.”

Watching his plan pan out via the worldwide live stream were his grown son and daughter, and his wife Crystal.

“My wife wants me to pay off her car so I guess I don’t have much of a choice but to do that,” Potter said with a laugh, when asked what he plans to do with the prize money.

When the final table was reached, the big story was that of reigning Indiana State Poker Champ Mike O’Neill, who looked like he would defend his title after doubling into the chip lead on the second hand of the final table. Unfortunately, he cooled off shortly thereafter, and ended up finishing in sixth place.

Another good storyline was the run of Adam Thomas, who won January’s MSPT Tropicana Evansville Regional, a tournament that attracted 416 entries and awarded a $30,674 first-place prize. Thomas was looking to win back-to-back MSPT events at the property, but he fell short, falling in third place for $32,090.

The final table played out as follows: