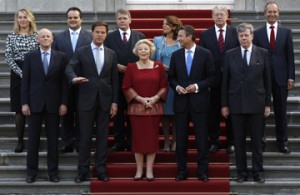 The Dutch cabinet has a serious decision to make regarding online gambling. (Image: Jerry Lampens/Reuters)

The Netherlands has been working to gather information to update its gaming laws, which will include all of the provisions necessary to fully regulate online gambling. The bill has now moved forward, with language approved by the Dutch Council of Ministers, and the plan is to create the law in 2014.

The implementation date is now tentatively set for January 1, 2015, but legislative approvals at all levels may require more time. And with new concerns being levied by the likes of the Council of State, there may be some amendments to the gaming law before it is officially passed and enacted.

The new gaming laws for the Netherlands lay out the details of a regulatory regime for operators, taxes, and state responsibilities.

Operators may apply for licenses if their “primary place of business or headquarters in a State party to the Treaty on the Functioning of the European Union or the Agreement creating European Economic Area” is confirmed. In essence, all online gaming operators must be located in an EU-approved location.

Operators will be required to pay special attention to anti-money laundering regulations and abide by any measures that are in place to reduce the risks of problem gambling for Dutch players. They must also prove that player funds are segregated in order to protect them from any operator default that threatens the operators’ assets.

Players will also have a responsibility to indicate the “limits of his gambling behavior” in order for the state to monitor gambling problems. Players will be encouraged to play on licensed sites only, which may restrict their activities to player pools within the Netherlands, but the law doesn’t specifically address any repercussions for playing on international sites.

The taxation rate has been set at 20 percent on gross revenue, as well as a 0.5 percent contribution from every operator for the treatment of and research into gambling addiction. In addition, there will be an additional 1.5 percent fee paid to fund the regulatory body (Kansspelautoriteit) overseeing online gaming in the Netherlands.

The current 29 percent gross revenue tax for land-based casinos will remain the same. However, the Dutch government has since decided to sell all of the 14 casinos operated by Holland Casino, the first 10 of which will be sold in a group and the other four individually. All of the sales will take place within the next year to adhere to the non-monopolistic regulations laid out in the new laws.

The Council of State has the job of making recommendations on all legislative bill drafts, and it has balked with regard to the new gaming bill. The senior Dutch governmental body feels that gamblers may not make the switch to licensed sites from unregulated ones and would like more stringent rules regarding the industry.

After criticisms from the Justice Ministry that deregulating the Internet gambling industry and breaking up the state monopoly, the Council of State tends to agree. Those advocating for the breakup and implementation of the new law assert that 80 percent of gamblers will switch from illegal sites to licensed operations, but the Council of State has its doubts due to the “international character of online gambling and the limited effect of rules which only have an impact on the Netherlands.”

The Council of State urged legislators to reconsider its proposals, including the tax rate that differs so greatly from online to land-based casinos.

Discussions are ongoing in the Netherlands to iron out differences and push forward with regulations in order to come to firm decisions by the end of 2014.