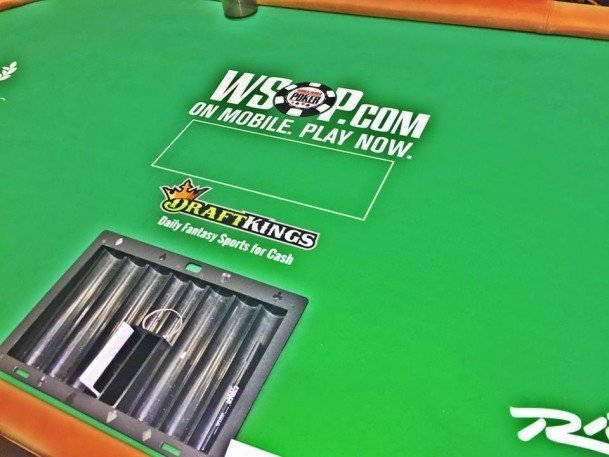 The DraftKings logo appears below every single flop of the summer’s WSOP coverage, but will be scrapped for the November Nine following the Nevada Gaming Commission’s ruling. (Image: CardsChat.com exclusive)

No DraftKings branding will appear at the WSOP final table, which kicks off November 8, as the embattled DFS company cuts ties with the premier poker brand in the world after being deamed an illegal gambling operator by the Nevada Gaming Commission.

The DraftKings logo was splashed liberally across the corridors of the Rio last summer and strategically emblazoned across all the WSOP’s poker tables.

Its placement was calculated so it would feature just below every single televised poker flop of the festival, but the relationship is now officially null and void.

Last week the Nevada Gaming Control Board announced that DFS constituted gambling under state law and that all sites offering such games to its residents must apply for sports betting licenses, just like other gambling operators. Failure to do so would constitute a felony and leave operators subject to arrests and fines.

“DFS in Nevada is illegal without the appropriate license, [which means] all unlicensed activities must cease and desist from the date of this Notice until such time as either the Nevada Revised Statutes are changed or until such entities file for and obtain the requisite licenses to engage in said activity,” wrote Control Board Chairman A.G. Burnett.

Match Made in Heaven

It was initially a marriage made in heaven, as both DraftKings and the WSOP spoke glowingly of “crossover potential,” “synergy,” and “demographics that line up perfectly” when the deal was initially struck back in May.

As part of that deal, DraftKings also secured exclusive rights within the DFS industry to offer the $10,000 Main Event seats as prizes to players within their competitions. November Niner Max Steinberg was one such player, winning his seat into the tournament for a deposit of just $27.

We wrote here just a month or so ago that in Steinberg, DFS could be about to have its very own “Moneymaker moment.” But Steinberg will not be wearing his DraftKings patch come November 8 and the dream marketing opportunity has probably been squandered.

A lot can happen in three months, and the seemingly unstoppable daily fantasy industry has taken a battering since the chips were bagged up last summer and the 10th place finisher was sent to the rail.

The so-called “insider trading” scandal has shaken public confidence in the sites and invited the scrutiny of both the New York Attorney General’s office and the office of the US Attorney for the Southern District of New York. The latter, of course, being the institution that brought down Full Tilt, PokerStars, and Absolute Poker on Black Friday by means of head honcho Preet Bharara.

DFS has always insisted it has nothing to hide and this will no doubt be borne out, one way or another, by the investigations, which will leave no stone unturned. However, the move to pull its branding from WSOP was made not by any regulator, but by DraftKings itself, and it’s clear the company is eager to comply with regulations in order to save itself potential trouble further down the line.

“In light of last week’s news in Nevada, DraftKings asked us to cease any sponsorship activities around the remaining few WSOP events of the year, and we complied,” said Seth Palansky at the World Series of Poker told The New York Times. Palansky  heads up Caesars Interactive Entertainment’s corporate communications division.

It’s not known whether reruns of the initial stages of the WSOP will be required to blur out DraftKings branding or whether it will be permitted to remain, since the sponsorship deal predated the Nevada ruling.

Adding yet another plot twist to this drama is the fact that DraftKings also has an existing high-profile sponsorship deal with WSOP broadcaster ESPN.

lots of people saw this coming !