We don’t have a World Series of Poker to cover this month, but a Doyle Brunson memorable moment will keep that summer WSOP fire lit. Three years ago today, “Texas Dolly” shocked the poker world first by arriving to compete in a bracelet event, and then even more by nearly winning the tournament. 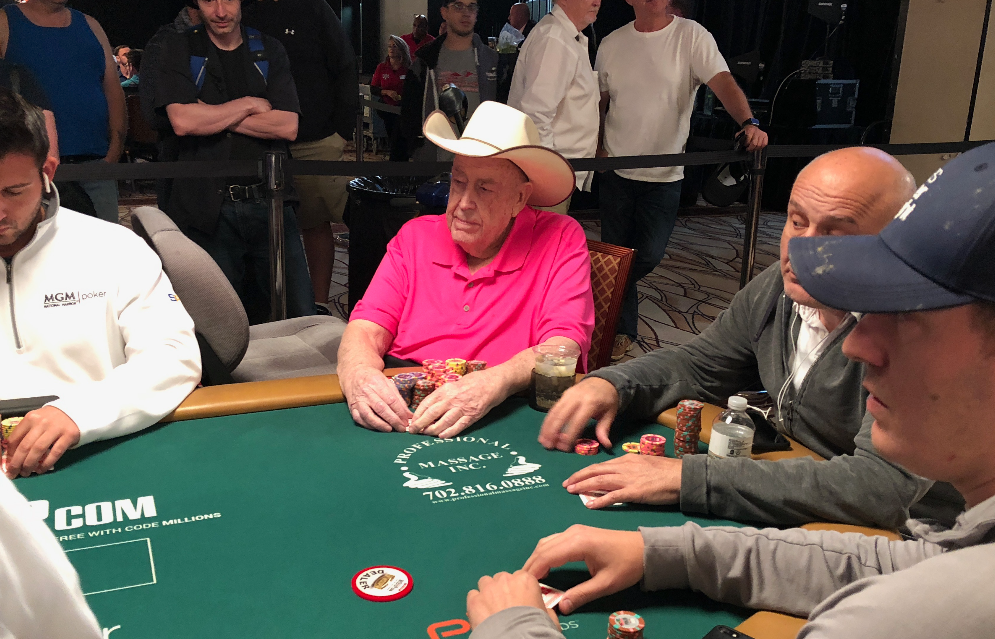 Doyle Brunson showed up ready to play one last time at the WSOP in 2018. (Image: CardsChat News)

Age hasn’t stopped Doyle from playing cards even still to this day just two months from his 88th birthday. He may never give up the game altogether, although he memorably retired from tournament poker three years ago. And he received quite an incredible and deserving sendoff in the process.

What a Day in Poker

On June 11, 2018, five years removed from his last tournament cash, the Poker Hall of Famer’s Hall of Fame son, Todd Brunson, suggested his legendary father show up to compete in the WSOP $10,000 buy-in 2-7 No-Limit Lowball Draw Championship, his favorite game. Doyle agreed and traveled across town to compete in the high-stakes bracelet event. Before doing so, he let the poker world know of his plans, and made it clear it might be the last time the poker community would get to watch him play tournament poker.

Despite being one of the greatest poker players ever, and tied for second all-time in WSOP titles (10), no one could have reasonably anticipated what was about to happen. Brunson, who hadn’t competed in tournaments the previous few years, late registered on Day 2 and quickly built up one of the top stacks.

Fans began to flock to the Rio in Las Vegas to catch a glimpse of the poker legend one last time in action at the World Series of Poker. Word quickly spread around the Rio and Twitter that Doyle was running up a big stack. You could sense the buzz, and just about everyone at the WSOP was talking about it.

By the end of the session, Brunson had fallen back to the pack, but he advanced to the final day with a shot at his 11th bracelet within sight. On Day 3, three years ago today, he reached the final table, but ran out of gas, and the cards simply didn’t fall his way. He busted in sixth place for $43,963, likely his final tournament cash ever. Upon busting, “Texas Dolly” smiled, tipped his trademark cowboy hat to the adoring crowd, and rode off on his scooter into the sunset.

Brian Rast, who will one day join Doyle Brunson in the Poker Hall of Fame, ended up shipping the bracelet for $259,670. But the main story line in this event was Doyle’s pseudo-retirement.

The story was so big that even ESPN picked it up. Scott Van Pelt, host of SportsCenter’s midnight edition, featured a segment on the poker legend that evening. Brunson still plays cards and, prior to the pandemic, remained a regular inside the Bellagio’s iconic “Bobby’s Room” (now “Legends Room”). But you will never again see the two-time world champion compete in a tournament.