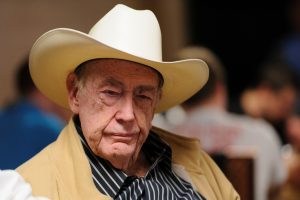 Doyle Brunson has spent as much time lately praising President Elect Donald Trump as he has crushing souls in Bobby’s Room at Bellagio.

“Holy Smoke!! Donald Trump blocked me on twitter. I was his biggest supporter in Nevada. What happened?” he frustratingly posted.

It’s unclear why the soon-to-be 45th President of the United States blocked one of his supporters.

Perhaps he didn’t know Doyle was a fan. Or, maybe he doesn’t care for his support (doubtful).

It’s a little strange for Trump to block a poker player. The Donald created the U.S. Poker Championships in 1996. The once prominent poker event was held at his Atlantic City Casino, Trump Taj Mahal.

ESPN interviewed the wealthy businessman during a broadcast and Trump made comparisons between poker and business. He clearly showed an interest in the card game.

Donald Trump is an avid Tweeter, and quite the trash talker on social media. The incoming president has reportedly been avoiding intelligence briefings but still has time to voice his displeasure with Saturday Night Live on Twitter.

Alec Baldwin, the actor who portrays Trump on SNL, isn’t doing a good job, according to the President Elect. During his SNL skit on Saturday, Baldwin cracked jokes about The Donald’s Tweeting habits. As per usual, Trump took the bait.

Baldwin responded to his comments by offering up a simple solution: if Trump finally releases his tax returns, he will dump the Trump skits. Trump became the first major party nominee who refused to release his tax returns, citing an IRS audit.

More than a year ago, Trump promised he would release his taxes once the audit is complete. Either the audit is taking an unusually long time or Donald told yet another lie.

Trump is, apparently, fed up with his critics. Not only has he bashed the media since winning the election on November 8. He’s also beginning to block people on Twitter, not just Brunson.

Even some low-profile Twitter users with less than 100 followers reported being blocked by the President Elect.

Trump hasn’t announced publicly the specific reason he blocked Doyle and others. But his detractors have often called him thin-skinned. Blocking people on Twitter probably won’t do much to change that reputation.

Trump’s Twitter could have been hacked, but my money would be on him going senile.

It’s lucky the president does not have absolute power!