Doug Polk made his Upswing Poker training lab even more valuable on Monday. The Las Vegas resident took down the most expensive tournament at this summer’s WSOP: the $111,111 buy-in One Drop High Roller for a $3,686,865 cash. 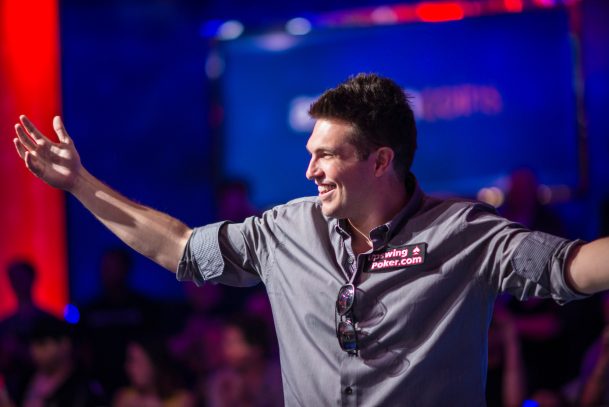 Doug Polk sent a message to his detractors by winning close to $4 million as the last man standing of the $111,111 buy-in One Drop High Roller at WSOP 2017. (Image: Drew Amato/pokerphotoarchive.com)

“WCGRider” secured his third career Series bracelet, but his first in a high-roller event. The latest win puts his lifetime career winnings at more than $8.8 million.

Polk used his well-known heads-up skills to defeat another poker legend: Bertrand “ElkY” Grospellier. He dominated the bleached blond Frenchman throughout. But the victory wasn’t just about the money and the bracelet. Polk undoubtedly quieted down some of those who have dissed him in the past, namely Luke Schwartz and “Hashtag King” Salomon Ponte.

“All you idiots who are paying this guy to coach you, he’s coaching you because he can’t win anymore,” Schwartz said about Polk on Joe Ingram’s podcast a few months ago.

If you’ve ever watched Polk’s live streams on Twitch, you’ve heard him beg his opponents to “foooooold” when he’s bluffing. At the final table, he was likely crying internally for Martin Jacobson to lay down a key hand.

The 2014 Main Event champion was put in a tough situation and made a questionable fold on Monday against the eventual winner. His decision was questioned by PokerGO announcers Max Steinberg, Norman Chad, and Lon McEachern. Jacobson is probably second-guessing his own decision hours later.

The 3♠ flipped over on the turn. Poker never lets you exhale, and now both players had a flush draw. Jacobson, still the favorite, had an even stronger hand, of course, with the made cowboys. After a check, he bet 1 million chips.

Polk pondered his move for a minute before deciding to shove his remaining 4,645,000 chips into the pot on a semi-bluff. This, even though if Jacobson called and won the hand, he’d have been close to the chip lead.

The former champion tanked for more than five minutes before deciding to lay it down.

“I got one through,” Polk announced to the crowd in the Amazon Room at the Rio.

Most poker players would have made the call. The only hand he was drawing dead to was A♠5♠, but given Polk’s line, he was clearly representing a set.

Had Jacobson called, the tournament outcome may have been different, but “coulda wouldas” don’t count in poker.

Jesse Martin also scooped a gold bracelet on Monday. He did so in Event #7, the $2,500 Mixed Triple Draw Lowball. Martin claimed his second career WSOP bracelet, this one for $130,948, after outlasting 225 players. He now has more than $2.8 million in live tournament winnings.

The Massachusetts resident had a formidable opponent heads-up: James Obst ($80,922). The Aussie made four deep runs in 2016 WSOP events, including a 13th place finish in the Main Event. But on this day, Martin came out victorious.

Colossus III had a total of 18,054 entries and is already down to just 41 players after Day Two. The winner is going to receive $1 million.

Raul Martinez Requena (5,270,000) has a slight chip lead over Erkut Yilmaz (5,150,000) heading into Day Three on Tuesday. Play resumes at 2 pm PST and the session won’t conclude until we have our final nine.

Matt Affleck is the biggest name left in the field. The Washington native has 2,890,000. Monday’s casualties included a pair of Team Cardschat members. Seth Foster went out in 146th place, which earned him the “last longer” prize of his $565 buy-in reimbursement. Ryan Laplante, a 2016 bracelet winner, busted in 222nd place.

The money bubble has already burst. Ryan Fee, Doug Polk, Blair Miller, and Steven Penner were the first to bust after the bubble burst.

Fee and Polk won t his event last year. Of course, Doug was unable to be of much help. He was too busy taking down the One Drop High Roller.

Event #9, the $10,000 Omaha Hi-Lo 8 or Better Championship also began on Monday. The tournament saw 155 players register and only 17 are moving on to Day Two.

There are many familiar faces left in the field, including Daniel Negreanu (514,000). Kid Poker came close to winning his first bracelet of the summer in the $10,000 Tag Team tournament, but fell just short. He set a goal to win three WSOP events in 2017.