Doug Polk won a tight heads-up battle against Tom Dwan in the most anticipated match of the WPT Heads-Up Poker Championship, a $25,000 buy-in tournament featuring 32 poker players all competing on the Poker King app. 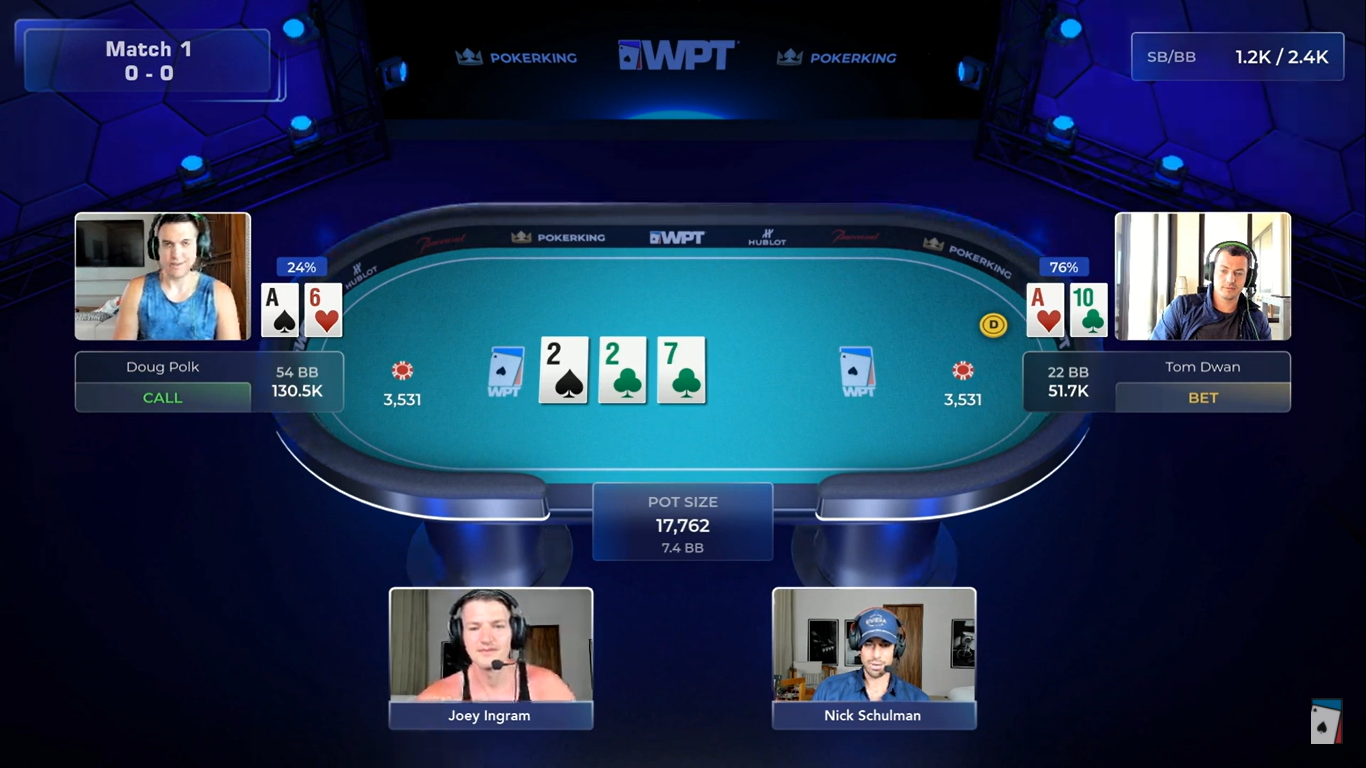 Tom Dwan and Doug Polk seemed like best of friends seated next to each other. (Image: YouTube)

Round 1 of the five-round competition took place this weekend. Viewers of the World Poker Tour Twitch and YouTube channels saw some intriguing battles, including Phil Ivey versus Manig Loeser, who was the loser in the match, dropping two out of three against the Poker Hall of Famer.

Ivey, an ambassador for Poker King, moves on to the second round to face another difficult opponent, Anthony Zinno, who bounced Danny Le (aka video game streamer “Shiphtur” from the tournament).

Each match consists of a best-of-three format, and the blinds increase every seven hands, creating some quick games. Jean-Robert Bellande is among the 16 players moving on to Round 2. The self-proclaimed “Bill Laimbeer of Poker” only needed two matches to bust Lynne Ji. Andrew “Lucky Chewy” Lichtenberger, Nick Schulman, and world-renowned DJ Steve Aoki are among those who bounced from the tournament this weekend.

The battle everyone expected

When Polk found out on live stream he would face Tom Dwan in the first round, he was ecstatic. The back-and-forth match on Saturday was quite entertaining, and the Upswing Poker founder came out victorious thanks in large part to a card dead opponent.

Both players were seated across from each other while playing on the Poker King app in Mexico. They were cordial throughout the contest, often times cracking jokes and acting like they’re best friends, even though they aren’t.

In fact, Polk has been highly critical of the former Full Tilt Poker star, even going so far as to refer to “durrrr” as a “scammer” on multiple occasions, including during a 2017 YouTube video in which he suggested Dwan took part in a seven-figure sports betting scam.

There was no drama between the players during Saturday’s match, however, as they put the past aside and put on a show for the poker community.

In the first match, Polk jumped out to an early lead, flopping pairs quite often, while Dwan frequently missed the flop. But Dwan would bounce back and take the lead before calling an all-in bet with K-7 off-suit against A-J off-suit as the blinds were getting big. The board ran out 8-4-10-J-10 with four diamonds, and Dwan was the only one holding a diamond (K), so he took down the 145,00-chip pot and Polk’s remaining chips.

In the second game, Dwan again was mostly card dead. He lost one crucial pot early on with A-K against pocket eights when he failed to pair up. The former online poker star lost a massive pot to a brutal river card moments later. Dwan, holding K-2, and Polk, with K-5, saw a rainbow board texture of 7-9-K-K. Both players had trips but the low kickers would likely lead to a chop.

In the rubber match, Dwan again didn’t find many favorable flops. He fell behind early, much like he did in the first two matches, but would come right back to take a slim lead that he couldn’t hold. On the final hand, with the blinds all the way up to 2,500/5,000, Dwan shoved all-in for 67,000 with pocket deuces only to have Polk snap-call pocket sixes.

The board came out 5-5-Q-K-10, giving Polk the match. Dwan is out of the tournament, and Polk moves on to the second round to face the winner of Patrik Antonius vs GACKT, a Japanese pop star. That match takes place Saturday night.