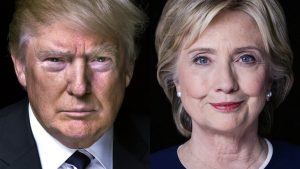 Hillary Clinton and Donald Trump are the clear presidential nominees and causing people to pick sides in the poker community. (Image: AP photo)

High stakes poker players, along with stacking chips and winning gold bracelets, have been known to have an opinion or twenty. So it should surprise no one that quite a few have been uber-focused on the upcoming U.S. presidential election.

What started with more than 20 candidates between the two major political parties is, presumably, down to a pair of competitors:  Donald Trump for the GOP and Hillary Clinton for the Democrats. Bernie Sanders remains in the race, but his odds to win his party’s nomination, according to virtually every (foreign) sports book that takes presidential waters, is worse than 12 to 1.

With the election essentially down to two candidates, some of the top poker players have taken to Twitter to pick a side. That includes the great Daniel Negreanu, who recently became an American citizen with a very specific goal in mind.

After receiving his citizenship, Kid Poker made it clear he intends to vote against Trump. A self-admitted liberal, Negreanu will be voting for Hillary. He asked his Twitter followers to weigh in on which candidate they are voting for, and why. Approximately 8,000 people participated, mostly of them likely poker players, since they are following him.

The results of the poll may come as a surprise to many. Poker players, in general, tend to lean to the left politically. But 57 percent of those polled said they are voting for Trump, which must have made Daniel sorry he even asked.

Shuffle and Up and Vote

Negreanu won’t be casting a vote for the billionaire businessman who lacks political experience, but not moxie. But Todd Brunson and Matt Glantz are examples of high stakes poker pros who will gladly cast a vote for Rosie O’Donnell’s arch-nemesis.

Glantz has found himself in some heated battles on Twitter recently from other poker players, including Vanessa Selbst and Olivier Busquet. Selbst couldn’t take Glantz’ political rants anymore, so she had to take action.

“It’s so recently typical of the oh so ‘tolerant’ left to be so intolerant of any other views but their own. Sad,” Glantz fired back.

Busquet, another liberal, came to the defense of the female superstar.

“This would only be true if she consistently blocked anyone who ever disagrees with her…which she doesn’t,” he commented.

Trump Has His Supporters

The presidential election has brought about some heated debates between poker players. And now that it’s all basically down to two main candidates, the banter has intensified even more.

Glantz, Selbst, Negreanu, and the male Brunsons (Todd and Doyle, both Trump supporters) have been among the most vocal on the Hillary versus Trump issue. Actor James Woods, a poker enthusiast, despises Hillary Clinton as well. He’s gone so far as to call her “the vilest human on the planet.”

Hyperbole aside, although it’s clear he won’t be voting the former First Lady into office, he won’t technically endorse a candidate.

“I don’t endorse anyone just for the record,” the actor said. “I abhor rudeness from lawbreakers interfering with [the] cherished American democratic process.”

Mike Matusow is also riding the Trump Train. We won’t post his exact Twitter quotes, because the grammar and spelling mistakes are just far too painful and plentiful. Let’s just say, The Mouth will proudly cast his vote for Donald J. Trump in November.

Late Thursday, one more high profile player in the gaming world got on board with Trump: Las Vegas Sands CEO and infamously anti-online gaming protagonist Sheldon Adelson. This might surprise some as The Donald has not expressed any views that would indicate he would be pro-RAWA, or interested in putting any federal bans on Internet gaming.

In fact, Trump has pretty consistently supported states’ rights on most issues.

According to The New York Times, Adelson found the decision to be a slam-dunk, however. “I’m a Republican, he’s a Republican,” the billionaire casino magnate told the consistently liberal-leaning news site of Trump. “He was one of the 17 [initial GOP candidates]. . . he won fair and square.”

Trump is going door to door now asking for money he has already said he cannot self fund a Presidential bid….. Adelson steps up says hey buuuuuddy I got the money your got the time?…… Trump says you bet ya gets on his kness and you know the rest of the story…… Anyone Adelson backs hes doing it for a favor …. Savy?????…… Anyone Adelson backs I do not back end of story….. If Trump ever came out about being for states rights or any poker bill maybe I would reconsider but the last statement I heard from him on poker was about 4 months ago when he said it should be up to Congress…. Adelson owns Congress….. The message between the lines is pretty clear.

Historically along with literature there’s still no better
method of expressing this than she wasn’t happy to sell her soul, to “make an offer using the devil”.
However, should they needed donald trump And hitler meme, after
over ten years operating, that will provide me some
concern. The very first time that his empire collapsed,
he used his business contacts and knowledge, and created The
Apprentice show.