The battle between Donald Trump and Hillary Clinton for the job of 45th president of the United States has been one of the most divisive in history. And taking sides in that ongoing war have been many a poker pro, who are soldiers on both sides of the political field. 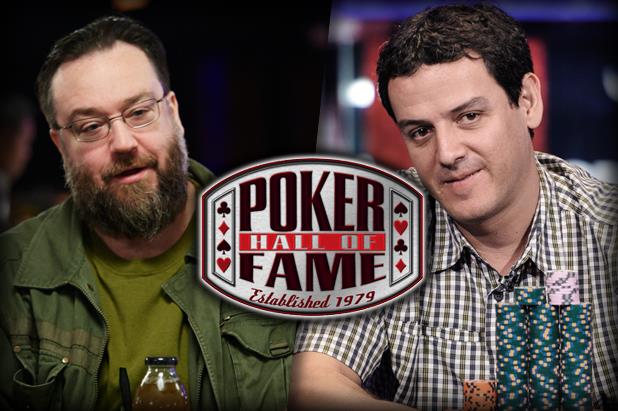 Todd Brunson (left), recently joined the 2016 Poker Hall of Fame, along with Carlos Mortensen (right), who won the WSOP Main Event back in 2001. Brunson has been in a heartfelt political social media war with another WSOP bracelet winner, Brian Hastings, as the election approaches.  (Image: bankrollmob.com)

On the Republican camp side is Todd Brunson, a recent Poker Hall of Fame inductee, while on the other is WSOP bracelet winner Brian Hastings. The two have been engaged in a heated political debate over whether or not Donald Trump is actually “racist” on Twitter, with just one more day to go until election results start pouring in.

Like so many arguments between poker players, this one ended in a wager.

Some poker players support Trump, who has built a campaign around the idea of ridding Washington of political insiders, while others are hopeful this country will elect its first woman president.

Hastings, a liberal who admittedly is voting for Hillary Clinton mostly because he fears a Trump presidency, got the argument going by accusing Trump and his supporters of bigotry in response to Brunson claiming an anti-Semitic Trump supporter at a rally was actually a “Hillary plant.”

It should be noted that Trump’s daughter Ivanka converted to Judaism before marrying her husband Jared Kushner in 2009, and both Ivanka and Kushner are active in Trump’s campaign. It also means the 70-year-old’s grandchildren by the couple are Jewish, making the idea that he would do anything anti-Semitic fairly absurd. But logic never got in the way of a good political argument.

“This isn’t an isolated thing. Even if he is a plant, Trump supporters chant bigoted things daily. Trump himself says them too,” Hastings posted on Twitter.

“This is the type of crap that’s gonna push me to vote for him. Can’t stand the double standard,” Brunson, who calls himself an undecided voter, responded. The Poker Hall of Famer asked Hastings for examples of bigotry from the Trump camp. Hastings’ response was to cite an article which alleges Trump didn’t immediately disavow the support of KKK member David Duke.

“This starts off with a flat out lie. He didn’t disavow David Duke cause he didn’t know who he as. What’s hard to believe?” Doyle Brunson’s son argued.

The article, written by Lydia O’Connor of the Huffington Post, listed 13 examples of Trump displaying racist behavior. “That’s disqualifying in his own way but hey I’m sure you have refutations for the other 12 also,” Hastings fired back.

The Huffington Post, like the majority of mainstream media sites, have been flagrantly pro-Clinton throughout the campaign, making little, if any, pretext of offering balanced coverage of the two candidates’ various misdeeds.

Is Trump a Reflection of a Segment of His Supporters?

Brunson again came to the defense of the Republican nominee. It’s no secret that some white supremacists are proudly supporting Donald Trump. But is the presidential candidate responsible for the beliefs of a portion of his supporters? Brunson doesn’t believe so.

“It’s not an accident that neo-Nazi groups like him. He promotes their ideals. He discriminated against blacks in housing,” Hastings said, referring to two old lawsuits against Donald and his father, Fred Trump, accusing them of refusing to rent to African-Americans.

“No ppl that worked for him did,” said Brunson.

“and you don’t think it’s because he and his father ordered them to?” Hastings asked.

“I don’t know and neither do u. U think the ceo of a huge Corp knows everything his employees do?” Brunson questioned.

“no but I think given his track record of bigotry in his ramblings and the judge thing he likely passed orders down,” Hastings argued.

As you may have guessed, neither poker player was able to persuade the other one who is right. The argument ended in Hastings suggesting Hillary supporters are better at poker than Trump supporters, challenging Brunson to a game of poker.

On Tuesday, this heads-up battle (the one between Trump and Clinton) will play out at last,and the Main Event of politics will come to an end for another four years.