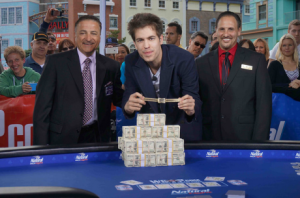 Dominik Nitsche has taken down another major event with the 2014 WSOP Nat’l Championship. (Image: wsop.com)

The National Championship is the culmination of the World Series of Poker Circuit season and awards the first WSOP gold bracelet of the summer. It is a freeroll for numerous qualifiers from the WSOPC season.

This year, the “Natty” as it’s called, was held at Bally’s Casino in Atlantic City, New Jersey. And while the final table was exciting due to the presence of big names and significant money on the line, the win by Dominik Nitsche was historic. He was the first European to make a National Championship final table, as well as the first WSOP Player of the Year qualifier to win a bracelet. In addition, it was his second WSOP bracelet and came with a solid $352,800 in cash.

And So It Began

Players gathered in Atlantic City for the 2014 WSOP National Championship, and a total of 124 players got in on Day 1. They consisted of the best players of the 2013/2014 WSOP Circuit season, WSOP Player of the Year qualifiers, and WSOP.com online poker winners, all of whom won their seats.

Only 50 players made it through the first day, however, and Jeff Gunnip was the leader of the pack with 201K chips. Dominik Nitsche was second in line with 171K, and others like Bryan Campanello, Eric Baldwin, Matthew Ashton, and Ylon Schwartz were in the top 10 as well.

Two more players joined before play started on Day 2, bringing the totals to:

Pay the Man His Money

By the time the money bubble approached, Matthew Ashton was doing quite well and eliminated Ruslan Dykshteyn to guarantee everyone else $21,269 for their play.

Greg Merson was the first to cash in 15th place. Timothy Campbell followed, as did Scott Clements and Bryan Campanello, at which point the unofficial final table was set as follows:

Play continued with time remaining in the evening, and Ashton quickly took over as the chip leader when he eliminated Michael Oshana in tenth place for $25,830.

Nitsche had fallen to a fairly short stack, but Lippel was shorter and ousted by Nitsche in ninth place. Ashton sent Gunnip packing in eighth, and Doss took care of Schwartz. The tournament was then stopped for the night with the following six players:

Searching for a Winner

Day 3 offered action on the AC boardwalk for spectators and fans. And it didn’t take long for the action to heat up with Polychronopoulos busting Robinson in sixth place. Bibb and Nitsche both doubled through Ashton, as Polychronopoulos surged into the lead.

Nitsche sent Doss out in fifth place with pocket tens over A-J, and Nitsche then took over the lead. And when Bibb moved with A-7, Nitsche called with A-K and sent Bibb home in fourth. Ashton risked his stack with pocket threes, but the A-J of Nitsche four-flushed to send Ashton home in third place.

Nitsche took 2.575 million chips into heads-up play against the 1.18 million of Polychronopoulos. The latter doubled, but Nitsche quickly regained the lead. Polychronopoulos risked his last chips with A-T against the A-8 of Nitsche, but an eight came on the flop and gave Nitsche the victory.