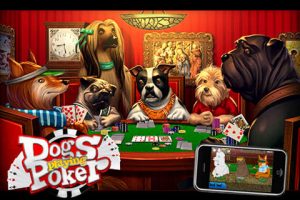 Jilli Dog was one of the few poker-playing Yorkies, who passed away at 17 after a long and illustrious career. (Image: shutthebarkup.com)

Jilli Dog, a Yorkshire Terrier known as the “World’s Only Poker-Playing Dog,” recently passed away by her owner Rick Caran’s side.

“Her last two days she couldn’t stand well,” Caran said, and after a veterinarian determined Jilli’s condition wasn’t painful, Rick took the beloved canine home, where she died the next morning of natural causes. She was 17.

Jilli won fame and adoration on local and national television broadcasts, including The Today Show, Disney’s Johnny and The Sprites, and “Pet Trends” on Animal Planet. In addition to playing poker and miniature basketball, she also worked as an actress and fashion model, and performed in a variety of events, such as trade shows, veterinary conferences, private parties, and charity events.

Jilli’s street cred didn’t only come from being a skilled gambler, which came later. Her life first intersected with Rick Caran 17 years ago, when he found the scruffy pooch wandering the streets alone with a growl in her stomach, and in desperate need of a shampoo and makeover. She wore no collar or tags, and appeared to have been abandoned.

“I didn’t even know what a Yorkie was at the time,” Caran said.

The precocious pup found a lifelong friend in Caran, however, and Jilli soon realized that her new owner could be trained to surrender bits of cheese and treats while the ambitious girl embarked, so to speak, on a new career as a poker star and entertainer. It was the start of a whirlwind adventure for the pair, who became attached at the paw going forward.

After a fulfilling career, Jilli retired at age 16 when her eyesight and hearing began to fail. Meanwhile, an eager understudy named “Ruby” (also a female Yorkie), was preparing with Rick to carry on Jilli’s legacy as a card sharp and performer.

Apparently determined to prove that a new dog can learn all kinds of tricks, Ruby has mastered Caran’s simplified “No Peek” poker game, which involves flipping over random cards and placing bets with dollar bills. Multi-talented in her own right, she also enjoys improvising on the piano.

Throughout her multi-faceted performing career, Jilli Dog inevitably won the hearts of many nursing home residents, shut-ins, and VA hospital patients through her work as a certified therapy dog. In a statement on Facebook honoring his beloved companion, Rick Caran ended with the following: “I cherish the day you walked into my life, those 16 years ago, a sickly pup from the street, and you turned it upside down… It’s been a great ride… Thank you…”

Poker players are often pet people too, so it’s not surprising to see a canine or two at the World Series of Poker. In fact, the WSOP Millionaire Maker tournament on May 31st kicked off with a group of entertainers called Jump! The Ultimate Dog Show. As the name suggests, it featured several well-trained dogs skilled in the art of mid-air Frisbee catching, and was intended to help “bring the fun back” to the world’s biggest poker festival.

Winning money and tournament hardware is also fun, and after Vanessa Selbst won her 3rd WSOP gold bracelet and $871,148 in the $25k entry Mixed Max event last May, she displayed her love for pets and poker by inviting her two dogs to pose alongside her for the winner’s photo.

Thank you, Elbert, for this great article about Jilli Dog, I really appreciate it… We are amazed at the people from around the world who knew this tiny pup and contacted us to give their regards about her passing… We are sad, but feel so happy that we had her love and joy for so many years… Thank you, again, best regards, Rick and the pups

You’re very welcome, Rick! I’ve enjoyed learning more about your way with Jilli, and her way with everyone blessed to know her. Kind regards, Elbert