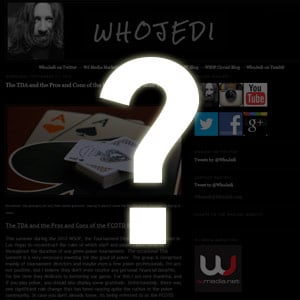 After Jay Newnum was caught stealing poker chips at a casino and subsequently announcing his retirement from poker, the disgraced reporter and blogger has decided to pull the plug on his website.

“Who Jedi?” is now “Where Jedi?” Poker reporter Jay “WhoJedi” Newnum, who said he was leaving poker after being caught stealing chips from dealers at a casino, is doing more than just leaving poker – he’s leaving no trace of himself. CardsChat.com News can reveal in a world exclusive report that Newnum has now pulled the plug on his popular Star Wars and poker themed website, WhoJedi.com. A visit to the website this week resulted in the message, “The requested URL was not found on this server. That’s all we know.”

Newnum, 41, of Fishers, Indiana, an Indianapolis suburb, was arrested in December at the Foxwoods casino in Connecticut after he was caught using sticky-coated chopsticks to fish out and steal $700 worth of poker chips from a poker dealers’ toke box during a tournament. As a longtime poker reporter who wrote for industry magazines and blogged, Newnum had been hired by Foxwoods to live-blog the tournament and post real-time video on the casino’s website.

After news of the arrest—and Newnum receiving probation for the offense—was publicly revealed in January, the scandal-scarred scribe wrote a long diatribe on his website about the incident and said that he was leaving poker “indefinitely.” He didn’t mention he would soon be pulling the plug on the website, which featured regular blog posts about poker as well as wacky photos of the chronically-immature Newnum dressed up as various characters from the “Star Wars” movies, a film franchise he sickly worshipped.

The website was actually quite a laugh riot, so it’s a shame Newnum has removed it because it provided much comic relief for anyone who bothered to read it. In one blog post, Newnum wrote how he “attended” the U.S. Naval Academy in Maryland and then Purdue University in Indiana. He didn’t say he graduated from the Naval Academy, just attended it, which suggests he didn’t make it all the way to graduation. So what happened? Did he get thrown out? Did he flunk out? The service academies in the U.S. all have rules where cadets famously can’t “lie, cheat or steal,” so did Newnum do something to get the boot, something that portended his later chip-copping behavior? He doesn’t explain. Even more puzzling is if Newnum had graduated from the Annapolis, Maryland-based military academy, why would he then need to also attend Purdue?

Some Success at the Tables

Another baffling bit of business about the beleaguered blogger is why he would risk everything for a lousy $700. A good deal of coverage was made by the media about his arrest, probation and leaving poker, but none examined his official poker-playing stats. CardsChat.com News did and can also reveal that in addition to being a poker reporter, Newnum was also a poker pro who had some success in casino tournaments. According to the poker player database at TheHendonMob.com, which lists all casino poker tournament results from around the world, Newnum had earned a total of $25,405 by finishing in the money in 21 different tournaments between 2009 and 2013. His best payday was earning almost $9,000 after winning an event at the Los Angeles Poker Open in 2011. But now that’s he’s a convicted chip thief, it’s unlikely he’ll be entering any more tournaments any time soon.

There must be something else going on in Jay’s life. I was in a tournament in October, well before the theft, seated next to Jay, and he was planning on leaving his job then.

I didn’t hear why he was leaving, but, he was pretty forthcoming with the fact he was making a career change.

a film franchise he sickly worshipped…………..